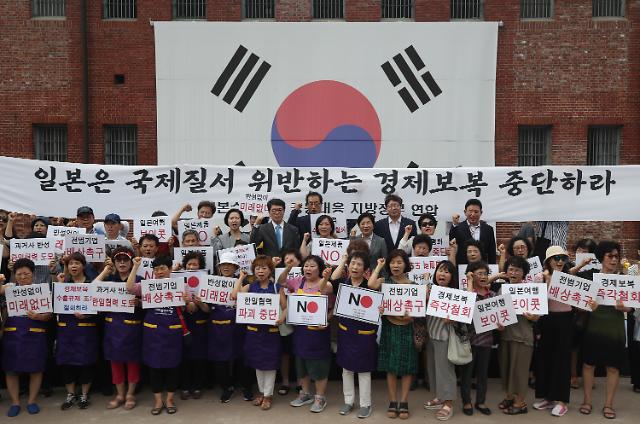 Local government officials demand a boycott of Japanese goods at a rally in Seoul on July 30.[Yonhap News Photo]

SEOUL -- South Korea's highest security body warned of "stern action" if Japan disregards a diplomatic solution and aggravates trade relations further without retracting restrictions on exports of key materials used for the production of microchips and displays. The warning coincided with an agreement to open dialogue between South Korean and Japanese foreign ministers.

National Security Council director Chung Eui-yong and other members reaffirmed the need to step up diplomatic efforts so that Japan can withdraw "unfair export restrictions." Japan strengthened regulations on exports of key materials. Officials and business leaders have expressed concern about irrecoverable trade relations between Seoul and Tokyo if Japan takes additional measures, including the removal of South Korea from a so-called "white list" of trusted importers.

"Our government decided to take stern action, including all possible measures, if Japan aggravates the situation further without withdrawing such measures, despite our efforts," the council said in a statement released the presidential office.

The council did not reveal what action to take, but the General Security of Military Information Agreement (GSOMIA) that enables Seoul and Tokyo to share military information in the face of common threats has been mentioned as a target of initial retribution. Chung has stressed that Seoul can review it only if a trade conflict intensifies.

The conservative government of South Korea's jailed ex-president Park Geun-hye endorsed the rare military accord in November 2016 at the height of North Korean missile and nuclear threats, with the blessing of Washington which wants a trilateral security alliance with Seoul and Tokyo.

South Korean Foreign Minister Kang Kyung-wha and her Japanese counterpart, Taro Kono, will meet on August 1 on the sidelines of the ASEAN Regional Forum (ARF) in Bangkok, Thailand, Kang's office said. That would be the first meeting of foreign ministers from the two countries since Tokyo pushed ahead with export restrictions on July 4.

Tokyo's trade retaliation sparked a broad boycott campaign against Japanese products, especially among young people who had been generally indifferent to a diplomatic row related to Japan's 1910-45 colonial rule. A Gallup Korea survey published on July 26 showed that 80 percent of South Koreans were reluctant to buy Japanese products.