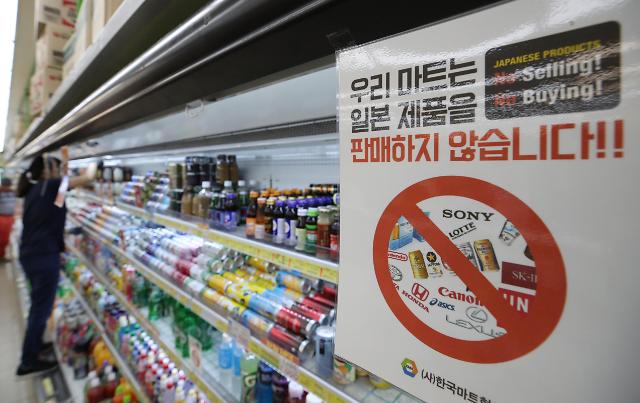 
SEOUL -- Calls for a boycott of Japan-made goods in South Korea are expected to come to a boil as Tokyo went ahead with its threat to widen controls over exports of materials by removing Seoul from a list of trusted trade partners despite repeated calls to scrap the move.

A boycott of Japanese goods has spread across Korea since Tokyo tightened controls on exports of three high-tech materials to Seoul on July 4, in apparent retaliation against Korean court rulings last year over Japan's wartime forced labor.

Korea has warned that the Japanese measures could backfire and disrupt global supply chains, blaming Tokyo for further impeding the Korean economy's struggle to stay afloat in the face of the already growing trade spat between its two largest trading partners -- the United States and China. Over the past month, Korean people shunned buying Japanese goods and canceled trips to Japan, with retailers reporting drops in the sales of Japanese products.

Bracing for an intensifying boycott of Japanese goods, the maker of Japan's largest fashion brand Uniqlo, Fast Retailing Co., apologized twice over remarks by its chief financial officer, Takeshi Okazaki, that the impact of the boycott by Korean consumers will not last long.

In a statement released both in Korean and Japanese, Uniqlo apologized for the remarks that it claimed were intended to mean that the chief financial officer had "hoped" not "thought" the impact will not be long-lasting. According to data by a local department store, sales of the Uniqlo brand dropped 30 percent on-month in July.

Japanese cosmetics brands, including SK-II and Shiseido, are also feeling the pinch of a boycott in Korea, with media reports saying that their sales fell about 20 percent on-month in July. Public anger is growing in Korea because it is the first time that Japan weaponized trade over the decades-old diplomatic row over wartime forced labor and shared history.

Sheen Seong-ho, a professor at the Graduate School of International Studies at Seoul National University, said in a commentary that the Japanese measures are self-contradictory. "Mr. Abe needs to reconsider his trade war against South Korea. First of all, as many international media sources point out, Japan's export restrictions contradict the principle of 'a free and open economy,'" Sheen said.

"Indeed, when asked about the rational for the sudden trade restrictions, the Japanese government contradicted itself, shifting back and forth between framing them as a history issue or a national security issue," the professor said. "Speaking of the poor export controls system of South Korea, the Japanese officials had a difficult time providing concrete evidence."

According to a survey of 504 Korean people, conducted by pollster Realmeter last week, 62.8 percent said they joined the boycott of Japanese goods. It marked a steady rise from two previous surveys. The rate was 48 percent in Realmeter's first such poll on July 10 and rose to 54.6 percent in a second survey on July 17. The poll has a margin of error of plus or minus 4.4 percentage points with a confidence level of 95 percent.

Realmeter said 68.8 percent of the respondents said they will participate in the boycott of Japanese goods in the future, while 26.4 percent ruled out their participation.

With trade tensions between Korea and Japan showing no signs of abating, people are also canceling trips to Japan. The number of Korean people who visited Japan via Incheon International Airport stood at 467,249 in the last 15 days of July, down 13.4 percent from a month ago, according to government data.

As demand declines over escalating trade tensions, Korean airlines are forced to suspend services or cut the number of flights on some Japanese routes. Earlier this week, Asiana Airlines Inc., Korea's No. 2 carrier, said it will reduce the number of flights on the routes to Japanese destinations, such as Fukuoka, Osaka and Okinawa, starting in mid-September. Top carrier Korean Air Lines Co. also plans to halt its Busan-Sapporo route beginning next month.

"Booking rates on routes to Japanese cities, like Sapporo and Okinawa, began to fall sharply in the third week of July. Overall reservations on the Japanese routes are on the decline as people are opting for other destinations for holidays and vacations," a Korean Air official said.
(Yonhap)