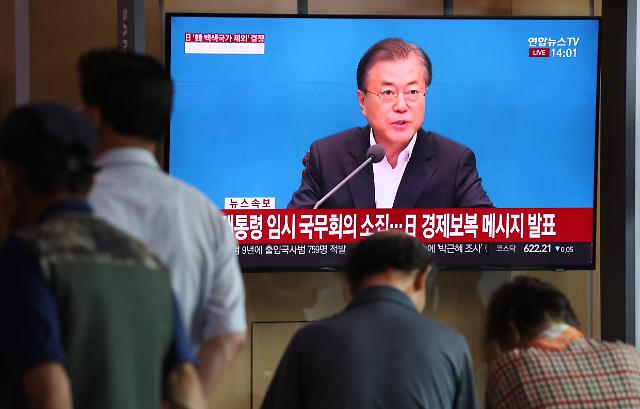 Through a TV at a railway station in Seoul on August 2, citizens listen to President Moon Jae-in who vowed to strike back at Japan's trade retaliation. [Yonhap News Photo]


SEOUL -- In a determined manner, President Moon Jae-in expressed deep regrets and vowed to strike back step by step at Japan's "reckless" trade retaliation aimed at hurting South Korea's economy and future growth, saying he would make a history of victory again with public support.

"As we have already warned, Japan will have to bear the brunt of the damage if it intentionally strikes our economy," Moon said in opening remarks at a cabinet meeting that came after Japan took fresh steps to remove South Korea from a list of trusted trading partners nearly a month after restrictions were imposed on exports of key materials used for the production of microchips and displays.

"Now that it is clear that Tokyo is responsible for the aggravation of the situation by ignoring diplomatic efforts of our government and the international community, I strongly warn Tokyo that it is fully responsible for what will happen," Moon said. "What we take even more seriously is the fact that the Japanese government's action is clearly intended to attack our economy and hurt our future growth."

Moon admitted that Japan's move would aggravate South Korea's economic woes. "But we will never lose to Japan again. We've overcome a lot of hardships and we've arrived today. We expect a lot of difficulties, but our companies and people have the capacity to overcome them."

The president urged the people to unite with confidence so that his administration can take "responding measures firmly against Japan's unjustified economic retaliation" and take it as an opportunity for a new economic leap forward.

"Although Japan is an economic powerhouse, we also have options to counteract if it tries to hurt our economy. We will step up our response step by step, depending on the situation of the Japanese government," Moon said. "As we have already warned, Japan will have to bear the brunt of the damage if it intentionally strikes our economy."

"The government will take the lead in believing in the great power of the people. I will make a history of victory once again with the people who have overcome challenges."

As its first step, South Korea decided to remove Japan from its own white list. The presidential office said it would consider scrapping a pact on sharing military information in the face of common threats. The pact has been supported by Washington to establish a trilateral security alliance in Northeast Asia.

"The government will take comprehensive countermeasures, including whether it is right to maintain the sharing of share sensitive military information with a country that shows a lack of trust to us and raises security issues," said Kim Hyun-chong, deputy head of the National Security Council, a high-level security consultation body,

"We will continue our diplomatic efforts, but we will also take steps to strengthen our export management by excluding Japan from a white list of countries," Strategy and Finance Minister Hong Nam-ki said, accusing Tokyo of putting its economic partnership with Seoul into an "irreversible" situation and shaking the foundation of security cooperation in Northeast Asia.

Japan's latest move is expected to affect 159 strategic goods, Hong said, unveiling measures to contain the fallout from Japan's trade retaliation, such as an alternative source of parts and materials, fast customs clearance, a reduction in tariffs, an expansion of production facilities, fast and sufficient financial support and bold investment in nurturing human resources.