Seoul can catch up with Tokyo through inter-Korean economic cooperation: President Moon 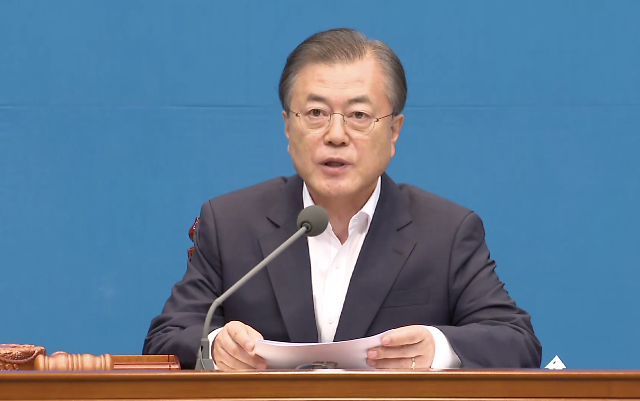 
SEOUL -- Based on its moral superiority and mature democracy, South Korea can catch up with Japan "at once" through economic cooperation with North Korea, President Moon Jae-in said, presenting a critical outlook that Tokyo cannot establish "a leadership position" in the world with its economic power alone.

"Japan can never stop our economy from taking off," Moon told a meeting of senior aides at his office on Monday. "On the contrary, it will serve as a stimulus to our commitment to becoming an economic powerhouse in the long run," he said, emphasizing the urgency of what he called "a peace economy" or inter-Korean economic cooperation.

"The Japanese economy has an edge over our economy in its size and domestic market, and we can catch up at once if the peace economy is realized through inter-Korean economic cooperation," Moon said. "Japan should realize that its economic power alone cannot establish a leadership position in the world."

Moon said South Korea would cherish democratic human rights values the most and consistently pursue a free and fair economy. "Based on its moral superiority, South Korea will elevate its status as a peaceful nation and a cultural powerhouse on top of a mature democracy and open up a new future as an economic powerhouse."

Moon has issued a series of warnings since Japan took steps on July 4 to restrict exports of key materials for the production of microchips and displays in South Korea. When Tokyo excluded Seoul on August 2 from a "white" list of trusted trading partners, Moon vowed to strike back step by step at Japan's "reckless" trade retaliation.

As its first step, South Korea decided to remove Japan from its own white list. The presidential office said it would consider scrapping a pact on sharing military information in the face of common threats. The pact has been supported by Washington to establish a trilateral security alliance in Northeast Asia.