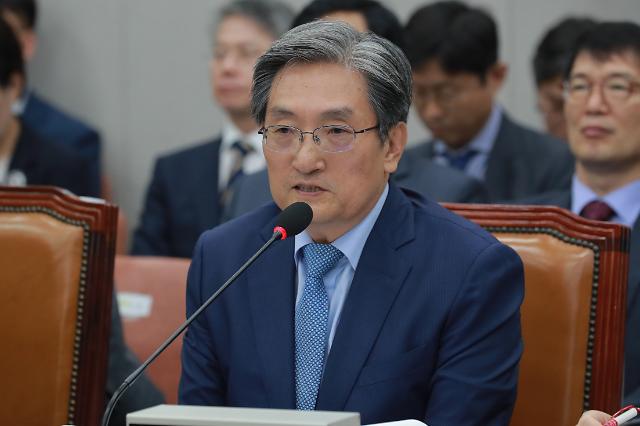 
SEOUL -- As part of its global strategy to set up a security network in Northeast Asia, the United States wants Seoul and Tokyo to maintain a pact on sharing sensitive military information despite their trade conflict, but senior aides to South Korean President Moon Jae-in vowed to seriously consider whether it is politically and militarily effective.

Noh Young-min, chief of staff at the presidential secretariat, told a National Assembly committee on Tuesday that Seoul would complete a serious review by August 24 over whether to ditch the General Security of Military Information Agreement (GSOMIA) that enables Seoul and Tokyo to share military information in the face of common threats.

"From the U.S. point of view, there is strong hope that South Korea, the U.S. and Japan will continue their military and security cooperation system," Noh said, adding Washington has not conveyed its official position on GSOMIA. He said that Seoul has not asked Washington to mediate in Japan's trade retaliation against South Korea.

The conservative government of South Korea's jailed ex-president Park Geun-hye endorsed the military accord in November 2016 at the height of North Korean missile and nuclear threats, with the blessing of Washington which wants a trilateral security alliance with Seoul and Tokyo. The pact has been mentioned as a target of retribution since Japan restricted exports of key materials for microchips and displays a month ago.

When Tokyo excluded Seoul on August 2 from a "white" list of trusted trading partners, Moon vowed to strike back step by step at Japan's "reckless" trade retaliation. As its first step, South Korea decided to remove Japan from its own white list.

Chung Eui-yong, director of the National Security Council, a high-level security consultation body, stressed that South Korea should make a decision "after a comprehensive review of military and diplomatic conditions."

"It is necessary to review whether we should continue to exchange sensitive military information with a country that maintains conflicting positions and whether it is appropriate," Chung said. "Given the situation between South Korea and Japan, we should seriously consider whether GSOMIA continues to be politically and militarily effective."

Chung suggested that the three countries could use a separate information protection agreement "even if there is no GSOMIA." North Korea gas denounced the pact while other interested parties in Northeast Asia have expressed discomfort.