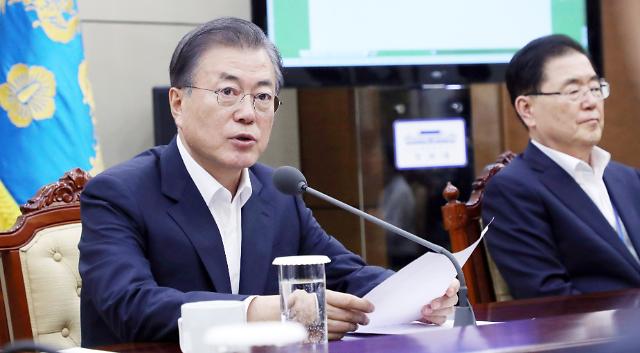 
SEOUL -- President Moon Jae-in made a spot inspection to spur a promising small company on the development of technologies to reduce its dependence on Japanese parts as Tokyo promulgated a revised bill to exclude South Korea from a list of trusted trading partners.

Moon offered words of encouragement during his trip to the factory of SBB TECH in Gimpo west of Seoul, which produces precision decelerators for robots, ceramic bearing and balls, and automation robot driving parts. The company has localized decelerators to replace parts from Japan.

Moon stressed that small and medium-sized companies armed with technology like SBB TECH should use Japan's export restrictions as an opportunity for a fresh leap, according to the presidential office. The Seoul government has promised to provide full support for robot manufacturers to acquire technologies and upstart mass production at an early date.

Under a revised bill promulgated on Wednesday, South Korea should go through a case-by-case review from August 28, leading to complicated trade procedures and delays on imports of strategically sensitive components and materials from Japan. The revised bill can be used to impose strict regulations on any goods listed.

In response to Japan's trade retaliation, South Korean has taken a series of measures to contain the fallout from Japan's trade retaliation, such as an alternative source of parts and materials, fast customs clearance, a reduction in tariffs, an expansion of production facilities, fast and sufficient financial support and bold investment in nurturing human resources.

Special treatment will be given to 100 strategic items, including those vulnerable to Japan's export restrictions, to secure a stable supply chain within five years in the fields of semiconductors, displays, automobiles, electric electronics, basic chemicals and machinery and metal.