​"Vietnam looks forward to the S. Korea-ASEAN Summit in November." 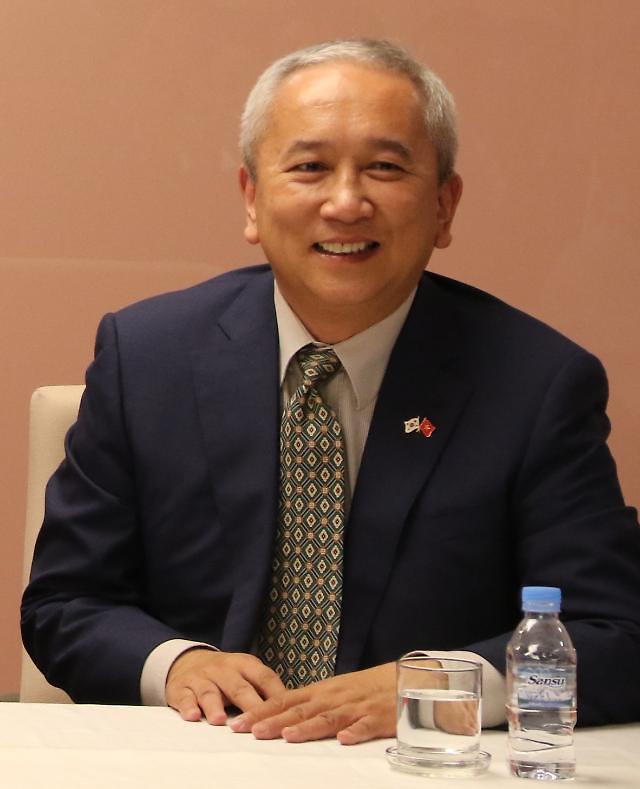 [Courtesy of Vietnamese Embassy in Seoul]

SEOUL -- Desks at the Vietnamese Embassy in Seoul were piled with official documents on August 8. Employees were struggling with endless waves of incoming phone calls, answering in Vietnamese and in Korean.

Vietnamese Ambassador to South Korea Nguyen Vu Tu is one of the busiest foreign mission chiefs in Seoul these days. While Vietnamese officials are visiting South Korea one after another, Vietnam-related events are being held every day.

Ambassador Nguyen said that he has been paying attention to Aju News, which started to publish news in Vietnamese for the first time as a major South Korean media outlet.

He spoke about the importance of education at the beginning of the interview. There are about 30,000 Vietnamese students studying in South Korea and at first, the students mainly majored in Korean studies, but these days, they are learning various majors such as humanities, engineering, and arts.

"The two countries' economic fields are now inseparable. I hope many South Korean companies will continue to cooperate with Vietnam. Above all, I look forward to seeing more "coach Park Hang-seo' shining both countries in the economic field."

He also proposed a new approach to the economy. In other words, figures like the South Korean football coach should also emerge from the economic sector to accelerate bilateral economic cooperation.

The economy is the centerpiece of a tie-up between South Korea and Vietnam. The bilateral trade volume is expected to surpass $100 billion next year. The ambassador expected that economic exchanges between the two countries will be further developed as of the upcoming South Korea-ASEAN summit in Busan in November.

"The meeting will mark the 30th anniversary of ASEAN and the 10th anniversary of the establishment of a "strategic cooperative partnership" between South Korea and Vietnam. I hope the South Korean government's New Southern Policy will take the lead in this summit. The Vietnamese Embassy is also fully prepared. The Vietnamese government is also very excited about this meeting."

Relations with ASEAN countries are becoming more important than ever amid the U.S.-China and Korea-Japan conflicts. Vietnam, in particular, is a key bridgehead for the New Southern Policy. The Vietnamese government reportedly plans to set up a large-scale delegation to Seoul, including those from major companies, for the summit.

"With the naturalization of Prince Ri Yong-sang, 'the close relationship' between Vietnam and South Korea began hundreds of years ago. I believe that filial piety and loyalty based on Confucianism are a strong foundation for promoting friendship and cooperation between the two countries."

Ambassador Nguyen also stressed that South Korea and Vietnam are the leading Confucian countries in East Asia. The common denominator, "Samgang Oryun" (the three bonds and the five moral rules in human relations), has become the foundation for South Korea and Vietnam to rapidly approach the restoration of diplomatic ties since 1992.

"I hope our Vietnamese people will consider themselves national ambassadors and try to abide by Korean law and contribute to the development of bilateral relations. Also, I hope to live a passionate life in Korea in order to raise Vietnam's status."

"South Korea and Vietnam are already like brothers in many ways. There may be differences, but it's important to try to look at each other favorably."

Ambassador Nguyen also said, "Please treat Vietnamese living in South Korea with a warm heart." He also said that the role of the two countries' media in leading public opinion is more important than anything else. At the end of the interview, he also conveyed his aspirations as the Vietnamese ambassador to South Korea.

"I think I`m serving as ambassador on behalf of 150,000 Vietnamese in South Korea. So, I feel a heavy responsibility. Thank you, South Koreans, for your kindness and friendship toward the Vietnamese. As a diplomat and one of the Vietnamese people, we will do our best to create the best 'friendship' between the two countries."