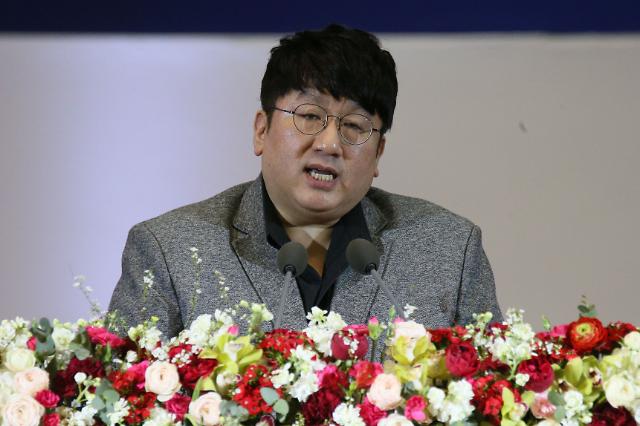 
SEOUL -- In a bid to become a major player in South Korea's music industry and strengthen its multi-label structure, Big Hit Entertainment announced the acquisition of Superb, a company specializing in multi-platform music games, underscoring an aggressive business strategy by its founder and CEO Bang Si-hyuk who has catapulted BTS to global fame.

Big Hit said Monday that it has completed a deal to acquire a stake in Superb. Financial terms and other details were not given. The agency said Superb would retain its existing management to maintain its color and independence as a game company. Big Hit said it has secured its ability to develop and service music and games based on intellectual property.

Superb would carry out global services by using the intellectual property of Big Hit and related companies. Superb, established in 2016, has launched "Pianista," a rhythm game for mobile and Nintendo switches, and a casual rhythm game using "Yumi's Cells", a popular webtoon.

"Big Hit thinks that games are an industry that will create strong synergy with music," Bang said. "I've been looking for a variety of opportunities, especially in the field of music games, because I think it's an area to show strength when it meets Big Hit's capabilities," he said, adding that his agency would step up its partnership with South Korea's leading game publisher Netmarble.

Netmarble has released BTS WORLD, an interactive mobile game including more than 10,000 images and 100 video contents of BTS members. Players can train BTS members and share their progress with other players. Bang is a cousin of Netmarble chairman Bang Joon-hyuk.

Superb has focused on creating new types of fun across the boundaries of music and games," Superb CEO Oh Min Hwan said. "We will try to create content that meets the expectations of global users through innovative content and development capabilities of both companies."

Big Hit has aggressively diversified is business. Last year, it absorbed beNX, an entertainment platform company known for its fan community service, Weverse, as well as a publishing company as subsidiaries. It established a joint venture with CJ ENM in March to nurture a K-pop idol group. In July, Bang acquired Source Music, a domestic label which manages girl group GFRIEND, to expand the spectrum of artists.

Bang, 46, has pulled BTS onto the global stage, working with BTS members in every song and encouraging them to fully express their emotions in writing lyrics that moved the hearts of millions of fans across the globe. He was chosen by Billboard as an international power player for the second time in two consecutive years.