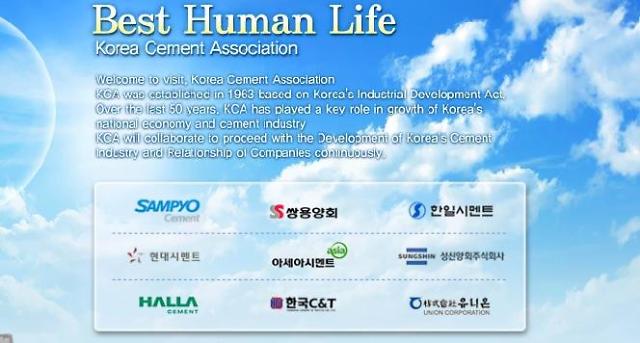 [Courtesy of the Korea Cement Association]


SEOUL -- South Korean cement producers made an inevitable choice to stop using imported coal ashes, bowing to concerns about contamination and a widespread "no Japan" campaign that followed trade restrictions pushed by the government of Japanese Prime Minister Shinjo Abe. They promised to use domestic products or develop alternative materials.

The Korea Cement Association said Monday that it would actively increase the use of materials from domestic thermal power plants or secure alternative raw materials from clay mines at home despite "unstable supply and demand" of coal waste.

"The cement industry will actively cooperate with the Environment Ministry's plan to strengthen the environmental safety management of imported coal ashes," the association said in a statement, admitting to difficulty procuring raw materials.

Out of 3.15 million tons of coal ashes used to manufacture cement in South Korea last year, 40.6 percent or 1.28 million tons were imported from Japan, according to the association which has nine members. The association said that its members have not violated rules in bringing Japanese coal waste.

As part of retaliatory steps, the Environment Ministry announced steps on August 8 to strengthen customs clearance for Japanese coal waste, citing fears of radioactive and heavy metal contamination. Importers should submit an authorized radioactive inspection report and the analysis of heavy metal components.

For use as cement raw materials, the concentration of cesium and iodine, which are artificial radionuclides, should be below the level of standard and the content of lead, cadmium, arsenic and mercury should be within recycling criteria, the ministry said.