BTS founder hopes to be 'paradigm changer' in K-pop history 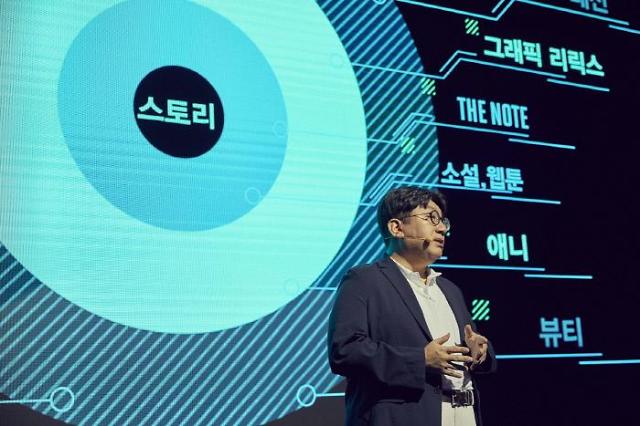 
SEOUL -- The founder of K-pop sensation BTS deserves compliment for catapulting his boys to global fame and scoring a stellar performance for his label, but he was never complacent and presented a new vision to be a paradigm changer in South Korea's music industry by realizing "transmedia" covering various genres such as webtoons, animations, dramas and comic books.

Big Hit Entertainment will speed up reorganization as its family has nearly quadrupled in a year with this year's first-half sales already reaching 200.1 billion won ($165.6 million), which is on par with last year's annual sales estimated at 214.2 billion won, CEO Bang Si-hyuk said in a press conference in Seoul on Wednesday.

"Big Hit has a bigger vision...What Big Hit dreams is innovation in the music industry," Bang said. "Innovation refers to changing the paradigm of existing business and improving the system while ultimately providing a completely new solution in the process of addressing the needs of customers."

There is ample room for the growth of K-pop, Bang said, adding K-pop falls far behind South Korea's game industry in the size of markets as it controls just a small portion of global markets. "I think it's because the music industry is not fully appreciated for its value and expandability."

"Big Hit believes that the music industry is also capable of such innovations. And Big Hit wants to achieve innovation and become a paradigm changer," declared Bang, who was chosen by Billboard as an international power player for the second time in two consecutive years.

Big Hit has aggressively diversified its business. Last year, it absorbed beNX, an entertainment platform company known for its fan community service, Weverse. It established a joint venture with CJ ENM in March to nurture a K-pop idol group. In July, Bang acquired Source Music, a domestic label which manages girl group GFRIEND, to expand the spectrum of artists.

Three days ago, BTS announced the acquisition of Superb, a company specializing in multi-platform music games, which would carry out global services by using the intellectual property of Big Hit and related companies. Superb has launched "Pianista," a rhythm game for mobile and Nintendo switches.

For innovation, Bang singled out the intellectual property (IP) of Big Hit's brand and storytelling IP businesses. "The key to Big Hit's IP business is to secure a strong influence by increasing the value of the brand created through artists, and expand it into a permanent brand business."

In the second half of 2020, Big Hit aims to launch the production of dramas based on famous drama producers and the worldview of BTS members. "For this kind of storytelling, we will realize transmedia through webtoons, animations, dramas, and comic books," Bang said, adding multi-labels would gradually apply storytelling.

Bang, 46, has worked with BTS members in every song and encouraging them to fully express their emotions in writing lyrics that moved the hearts of millions of fans across the globe. Wednesday's event came after BTS went on a long vacation for the first time since their debut in June 2013.

Bit Hit co-CEO Lenzo Yoon presented a new concept of concerts so that fans can communicate with artists more closely. He also called for the active use of pop-up stores and concert-themed festivals, backed by new technologies such as artificial intelligence, 5G and virtual reality.

"I think future performances should be different. I think we should be able to enjoy live performances on the ground. Some people can enjoy a picnic at the concert hall, while others can enjoy the performance vividly in their homerooms. This will allow artists and fans to communicate more closely."

Some 100,000 fans enjoyed BTS stadium concerts in London, Los Angeles and Paris by opening pop-up stores, while various events were held outside stadiums to turn the cities into festival venues, Yoon said.