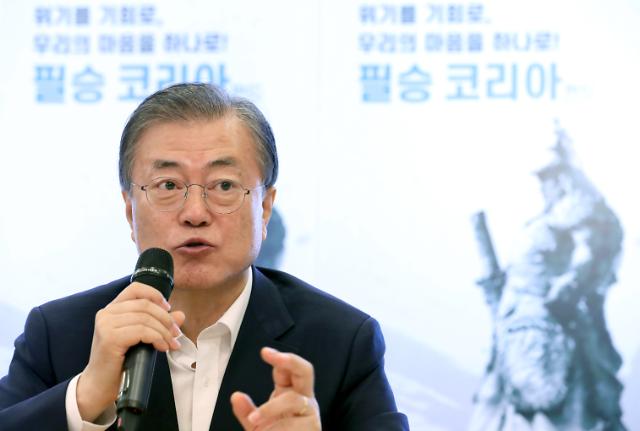 President Moon Jae-in speaks after joining a stock fund at the headquarters of NH Nonghyup Bank in Seoul on August 26. [Yonhap Photo]

SEOUL -- President Moon Jae-in, who is a shining example of frugal living, made a difficult choice to draw money out of a bank account for an unprecedented investment in a stock fund to spearhead a campaign aimed at enhancing the competitiveness of South Korean companies which are striving to reduce their dependence on raw materials and equipment from Japan.

Moon visited the headquarters of NH Nonghyup Bank in Seoul on Monday and invested some 50 million won ($44,326) in the so-called "Pilseung (certain victory) Korea Fund," a stock fund which has been created to support firms manufacturing materials, components and equipment. It's the first time that he has put money in such a fund.

In line with a government-led campaign to localize technologies, the fund would lower operation and sales fees to channel more profits into companies in need of money for research and development as well as other business activities. The investment reflects Moon's will to set an example.

"If we raise the competitiveness of the material and parts industries, it will raise the level of the entire manufacturing sector," Moon said at talks with NH Nonghyup Bank officials. "It is very necessary not only as a countermeasure against Japan's trade retaliation but also for our competitiveness."

Moon, a former human rights lawyer, has led a frugal life. In 2017, a picture showed him wearing his worn-out shoes when he knelt in prayer at a cemetery for the victims of a bloody 1980 civic uprising in the southern city of Gwangju. Moon purchased his shoes from a hand-made shoe brand in 2011.

In response to Japan's trade retaliation, South Korea has been in full swing to localize key materials regulated by Japan, which excluded South Korea from a list of trusted trading partners after restrictions were imposed in early July on exports of three key materials used for the production of microchips and displays.

South Korea has taken a series of measures to contain the fallout from Japan's trade retaliation, such as an alternative source of parts and materials, fast customs clearance, a reduction in tariffs and sufficient financial support. Special treatment will be given to 100 strategic items, including those vulnerable to Japan's export restrictions, to secure a stable supply chain within five years.