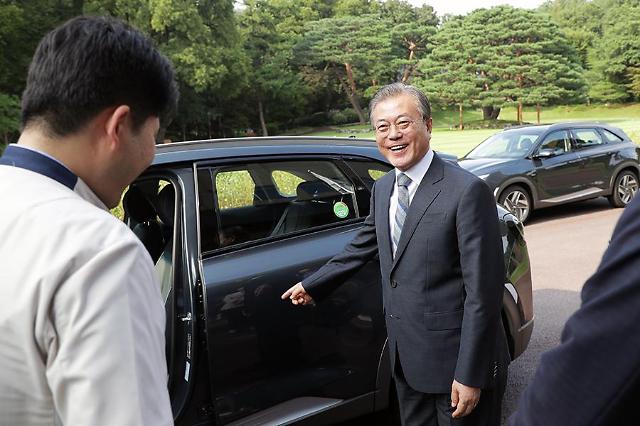 SEOUL -- Nexo, a fuel cell-powered sport utility vehicle developed by Hyundai Motor, made its debut as a new presidential car, carrying President Moon Jae-in in a brief run across the presidential compound. This would be the first hydrogen fuel cell vehicle adopted as a presidential car in the world.

Moon moved from one office building to another aboard Nexo, the president's office said in a statement on Tuesday, adding Moon introduced Nexo as a presidential car in accordance with his willingness to help revitalize the hydrogen economy and reduce fine dust.

"This is especially meaningful in that it was the first hydrogen car to be adopted as a presidential car," Moon was quoted as saying. "Expectations are high for the changes and economic effects of our daily lives that hydrogen cars will open up."

Moon will use Nexo mainly for commuting during weekdays and daily work at the Blue House. Afterward, the scope of use will be gradually expanded depending on Moon's schedule, according to the presidential office. The Blue House runs two Nexos for the presidential secretariat and five for the security service.