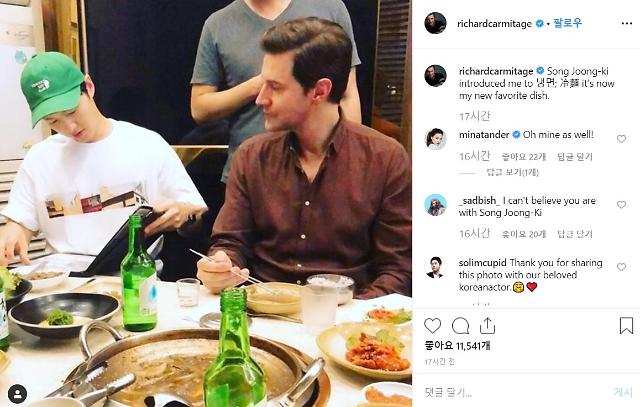 SEOUL -- British actor Richard Armitage, widely known for his role of "Thorin Oakenshield" in the epic fantasy film series "The Hobbit", expressed his love for a traditional Korean noodle dish after having a meal with a prominent South Korean actor in Seoul.

"Song Joong-ki introduced me to 냉면; 冷麵 it’s now my new favorite dish," the 48-year-old British actor said in an Instagram post that included a picture of Armitage and Song enjoying Korean dishes at a restaurant in Seoul.

Armitage also uploaded another photograph of Naengmyeon and said: "Apparently there is a Korean pop song...about this bowl of noodles!!!"

Jessica, a former member of K-pop girl band Girls' Generation, and singer Park Myung-soo collaborated to release the 2009 hit song titled Naengmyeon which depicted love toward the cold bowl of noodles. Armitage was reportedly in Seoul to shoot "Lightning Ship", a sci-fi film starring him, Song and actress Kim Tae-ri. 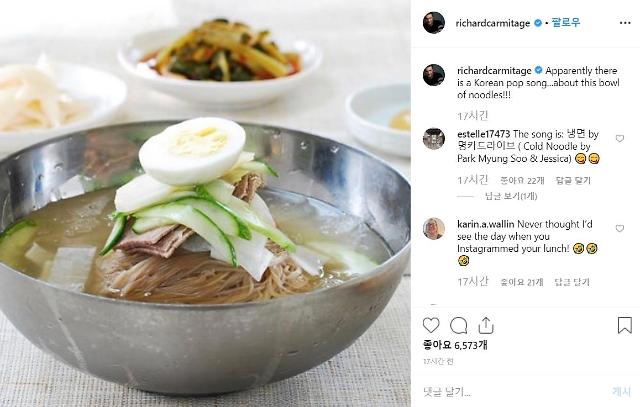 Naengmyeon, a traditional menu which originated from the northern parts of the Korean peninsula, is mainly made of buckwheat and served in cold beef broth with garnishes of sliced egg, Asian pear, radish, cucumber and pressed cold meat.

Many foreigners do not favor Naengmyeon because of its cold and chewy texture. The cold noodle soup gained attention in April last year when it served at the dinner between North and South Korean leaders following their historic rendezvous at the truce village of Panmunjom for an inter-Korean summit.
.