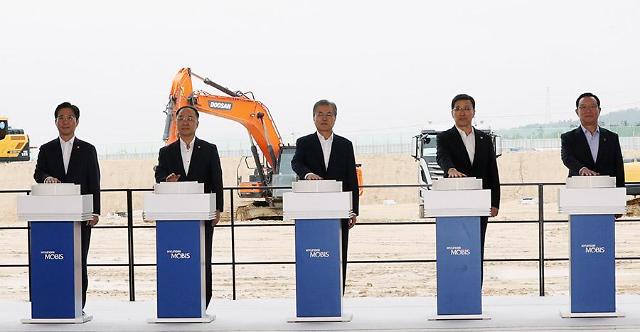 SEOUL -- Hyundai Mobis, a parts-making unit of South Korea's Hyundai auto group, broke ground for a new parts plant for electric vehicles at its home base after relocating production facilities from an unnamed foreign country. Production of components that can be used for about 100,000 all-electric vehicles annually will begin in 2021.

Hyundai Mobis said Wednesday that it would invest about 300 billion won ($248 million) in the new plant in the southeastern industrial city of Ulsan to manufacture components for Hyundai Motor's all-electric vehicles using its Electric-Global Modular Platform (E-GMP).

"We are able to realize economies of scale in the expanding electric vehicle market being led by North America and China," Ahn Byung-Ki, vice president of Hyundai Mobis' electronic powertrain division, said in a ground-breaking ceremony attended by President Moon Jae-in.

Hyundai Mobis scaled back production facilities abroad and came back with five contractors, triggering speculation that it has relocated some facilities from China for a U-tern investment.

The U-tern investment is "very welcome news that can rejuvenate our economy and create new jobs," Moon said in his speech. "Our economy has no choice but to protect itself at a time when a free and fair trading system is shaken and trade retaliation for political purposes occurs."