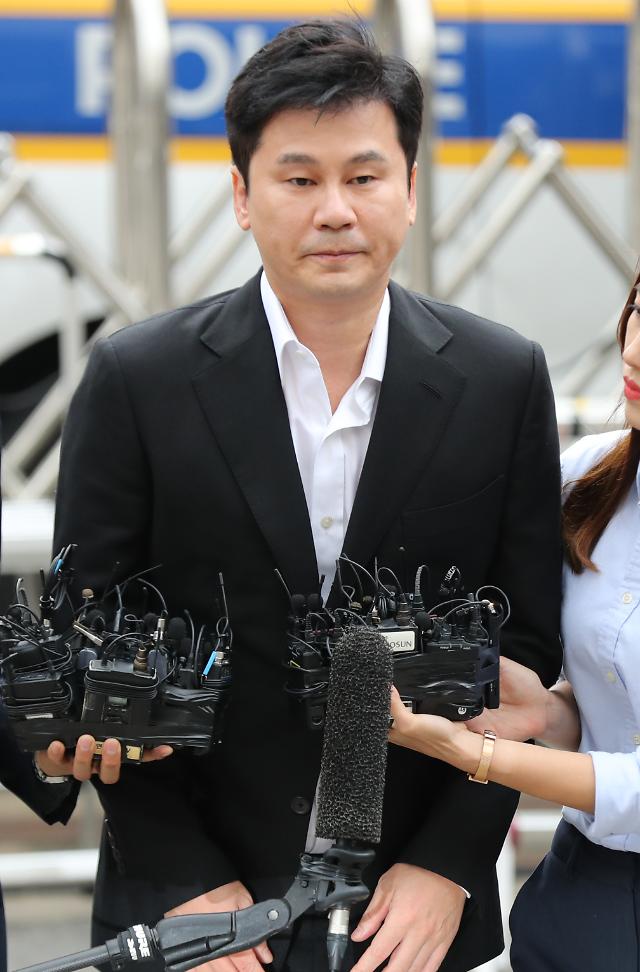 SEOUL -- Taking off his trademark black cap, the founder of YG Entertainment who produced popular bands such as BIGBANG, 2NE1 and BLACKPINK appeared in a police station for questioning into suspicions that he provided sexual services to foreign investors for business favors and used company money for gambling abroad.

"I'll faithfully get involved in the police investigation," Yang, clad in a black suit, told reporters Thursday as he walked into the office of the intellectual crime Investigation team in Seoul.

Seungri, a disgraced BIGBANG member who has been at the center of a series of sex and other scandals that have rocked South Korea's music community this year, was grilled for more than 12 hours on similar charges the previous day. Yang and Seungri are suspected of violating a foreign exchange transaction law to secure money for gambling at casinos in Las Vegas.

Separately, Yang, 49, is suspected of providing sexual services to two Southeast Asian investors in 2014 for business favors. His agency has issued a flat denial.

An investigation has been launched into drug use, sexual assault and violence at Burning Sun, a music and dance club associated with Seungri, since a 28-year-old man claimed in January that he was beaten by Burning Sun employees. Seungri was accused of having used dance clubs to arrange sex for business favors from foreign investors.

During their investigation, police found that some Burning Sun employees have trafficked drugs. Also, a sex video scandal was exposed, forcing the departure of several celebrities including singer-songwriter Jung Joon-young, who was arrested on charges of sharing illegally filmed sex video files with Seungri and other artists.

On June 14, Yang resigned as YG head, complaining about the rampant circulation of rumors, two days after Kim Han-bin, a member of boy band iKON, left for attempting to buy drugs. A woman, who was investigated for using drugs in 2016, argued that Kim has not been questioned by police because Yang forced her to change her testimony about the former iKON leader.