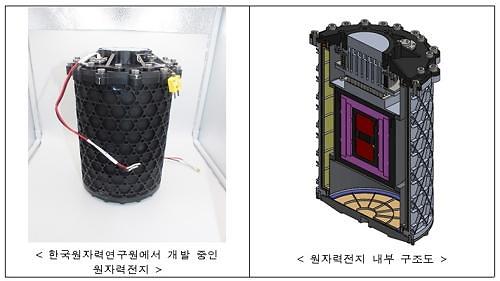 SEOUL -- After two years of technical reviews, British and South Korean researchers will work together for the development of nuclear power cells to take a share of the global market for strategic components of space exploration that has been dominated by the United States and Russia.

The Korea Atomic Energy Research Institute (KAERI), a state nuclear research body in South Korea, said in a statement on Monday that it signed a memorandum of understanding with Britain's University of Leicester and the National Nuclear Laboratory (NNL) to co-develop an atomic battery for space expedition and research power systems.

Nuclear batteries use energy from the decay of a radioactive isotope without a chain reaction. They last much longer and can survive in much harsher conditions than their chemical counterparts. They are used in facilities or devices which must operate unattended for long periods such as space stations, pacemakers and underwater facilities.

"Nuclear batteries for space exploration are one of the strategic technologies of major countries," Son Kwang-jae, a senior KAERI researcher, was quoted as saying. He said that through research cooperation with Britain, South Korea can save time to develop nuclear battery technologies.

South Korea and Britain are latecomers in the development of nuclear batteries. They would develop devices and establish international standards for licensing nuclear power cells. The University of Leicester leads the research of radioisotope thermoelectric generators (RTG) for the European Space Agency (ESA), an intergovernmental organization of European member states.

Normally, atomic batteries use plutonium (Pu-238) as a radioactive isotope. ESA focuses on the research of atomic batteries using americium (Am-241), which can be obtained cheaply from spent nuclear fuel and is considered suitable for deep space exploration due to its longer half-life than plutonium. AM-241's half-life is 432.2 years.

Britain has secured a process to manufacture the Americium heat source by reprocessing spent fuel. KAERI said that the prototype of a carbon composite material protection module for the safety of isotopic heat sources in the event of a spacecraft accident has already been made.

South Korea has stepped up the development of nuclear technologies for peaceful use.

President Moon Jae-in gas unveiled a new energy roadmap to replace fossil-fueled power plants with clean and renewable energy sources, but there has been no clear answer from policymakers to address concerns about the management of spent fuel, which have been a stringent issue because Washington refused to revise a 2015 accord that has effectively restricted the development of reprocessing facilities to acquire enriched uranium as fuel.

In November last year, KAERI said it would cooperate with TENEX and other Russian bodies to secure technology related to the decommissioning of nuclear and radiation hazardous facilities. TENEX is a key Russian organization in nuclear uranium conversion, enrichment services and spent fuel and radioactive waste management.