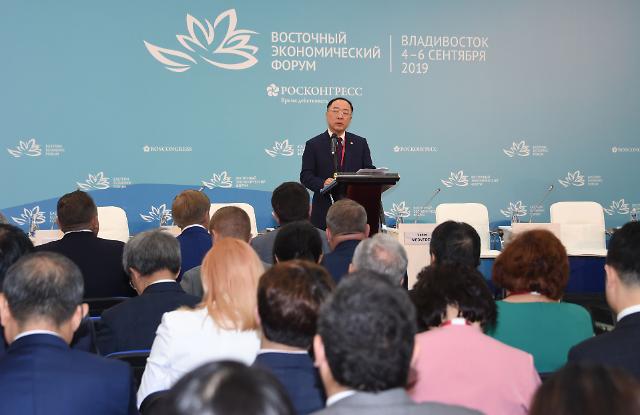 
SEOUL -- South Korea's top economic official called for a joint investment fund between Seoul and Moscow to foster materials, parts and equipment industries, saying the two countries should lead the establishment of a strong Eurasian value chain in Northeast Asia.

The proposal from Finance and Strategy Minister Hong Nam-ki came at the Eastern Economic Forum, an international forum held each year in Vladivostok for the purpose of encouraging foreign investment in the Russian Far East.

"We propose that South Korea and Russia jointly invest to create a large-scale investment fund to foster materials, parts and equipment industries," Hong said. "Russia can secure overseas sales through the commercialization of basic raw materials technology, while South Korea can provide funding for a joint project to diversify import supply lines for materials, components and equipment."

Apparently mindful of Japan's export regulations, Hong called for the reconnection of a Eurasian value chain and the development of border areas in the Far East if favorable conditions are created in the future.

"If the economic value chain continues to corrode due to political and diplomatic conflicts between countries, the link between them will be broken and the entire economic bloc will be depressed," Hong said. "We already know that even the most economically strong countries, if their connections with neighboring countries become weak, they will be isolated and alienated from the entire value chain and eventually cannot escape the decline."

South Korea has been in full swing to localize key materials regulated by Japan, which excluded South Korea from a list of trusted trading partners after restrictions were imposed in early July on exports of three key materials used for the production of microchips and displays. President Moon Jae-in has blasted Japan's trade retaliation for hurting South Korea's growth and destroying a global supply chain.