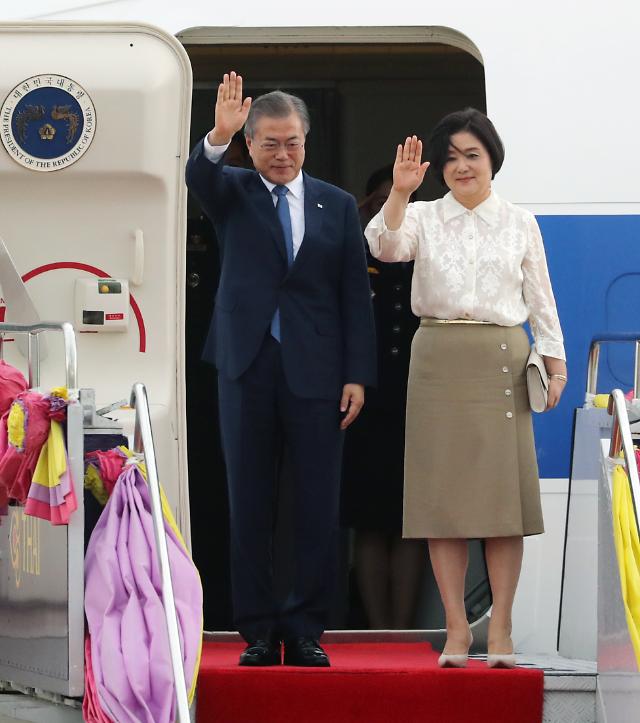 The allies have agreed to hold the meeting to coincide with Moon's visit to the U.S. city for the 74th General Assembly session of the United Nations from Sept. 22-26, according to Cheong Wa Dae spokesperson, Ko Min-jung.

But the two sides are still in consultations on a detailed timetable for the summit, she added.

Moon is scheduled to deliver a keynote speech at the U.N. session on Sept. 24.

He will also hold a series of bilateral meetings with U.N. Secretary-General Antonio Guterres and leaders from other countries.

Moon is to join an event to prepare for a P4G summit and the U.N. Climate Action Summit as well. P4G stands for Partnering for Green Growth and the Global Goals 2030, a new climate alliance aiming to become a new engine to drive eco-friendly growth.

Asked about the possibility of Moon meeting separately with Japanese Prime Minister Shinzo Abe in New York, Ko said that no decision has been made yet.

In the Moon-Trump summit, as usual, the North Korea issue will be high on the agenda.

"(We) are not at the stage of speaking (to the media) about specific agenda items," Ko said at a press briefing. But she presented what she called a "cautious" view that "giant cogwheels" seem to "have begun to move inch by inch" toward peace on the Korean peninsula.

Many observers predict that John Bolton's departure from the position of U.S. national security adviser will have a positive effect on their negotiations. He is known for his hawkish approach toward Pyongyang.

Moon and Trump are also likely to discuss sensitive issues like the trade dispute between Seoul and Tokyo and how much South Korea should pay for the presence of U.S. Forces on its soil.

U.S. officials have expressed concern about the Moon administration's decision to terminate an accord with Japan on sharing military intelligence in response to the neighbor's retaliatory export restrictions. They want Washington's two key allies to get along with each other for three-way security cooperation in East Asia.

The main opposition Liberty Korea Party urged Moon to use the upcoming summit as an "opportunity to strengthen the (health of) the South Korea-U.S. alliance."

Currently, it argued, the Korean Peninsula is facing an "unprecedented crisis," with the alliance in jeopardy and no indication that North Korea will stop its "missile provocations."

"There is an urgent need to firmly re-establish the South Korea-U.S. alliance again through the summit meeting that will be the ninth of its kind under the Moon Jae-in administration," Kim Myung-yeon, the conservative party's spokesman, said in a statement, stressing the importance of the alliance and national security.

The ruling Democratic Party said it's "more meaningful than any other time" for the presidents of South Korea and the U.S. to have a chance to discuss "concrete ways" to advance regional peace ahead of a U.S.-North Korea summit that may take place late this year.

Moon and Trump had their previous summit in Seoul on June 30, after which they traveled to the Demilitarized Zone (DMZ) together. They briefly met with North Korean leader Kim Jong-un at the truce village of Panmunjom within the DMZ, which serves as the inter-Korean border.