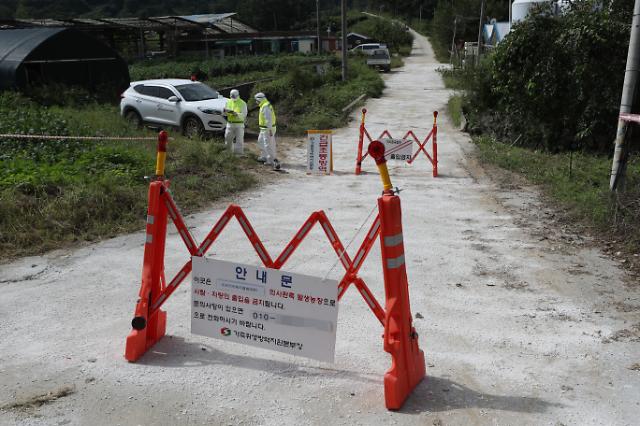 SEOUL -- The second case of African swine fever was reported at a pig farm near the inter-Korean border, a day after the first confirmed case triggered a nationwide standstill for sterilization, raising concerns about the spread of the deadly and highly contagious animal virus.

Quarantine officials detected the virus of African swine fever (ASF) Wednesday from a pig which was found dead the previous day at a farm in the frontline town of Baekhak in Yeoncheon County, which borders North Korea, according to the Ministry of Agriculture, Food and Rural Affairs.

Some 2,000 pigs are being raised at the farm in Baekhak, 35 kilometers (22 miles) northeast of a farm in Paju where the first ASF case was confirmed on Tuesday. Some 4,700 pigs have been culled in Paju with the movement of pigs, people, vehicles and equipment banned at 6,309 farms, slaughterhouses and feed factories.

Quarantine officials have yet to complete an epidemiologic investigation, but the Seoul government decided to control the population of wild boars in border areas. Since Pyongyang reported its first confirmed case in May, South Korea has tried hard to prevent ASF from entering through wild boars living north of the Demilitarized Zone (DMZ), which splits the Korean peninsula.

ASF is not harmful to people, but it is highly fatal and epidemic for pigs, with a mortality rate of up to 100 percent. The epidemic has spread to China, Vietnam, Mongolia and other Asian countries.