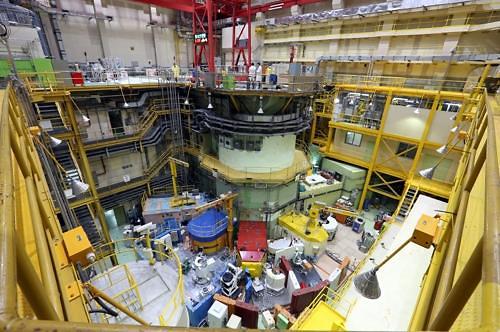 SEOUL -- South Korea's only home-made multi-purpose research reactor and related facilities were designated by an international nuclear watchdog as one of its International Centres based on Research Reactors (ICERRs), demonstrating the international status of nuclear technology accumulated by a state research center.

The Korea Atomic Energy Research Institute (KAERI) said Wednesday that it has received a signboard for the designation of ICERR from Cornel Feruta, acting director-general of the International Atomic Energy Agency (IAEA), at its regular meeting in Vienna.

The ICERR scheme is intended to help IAEA member states gain timely access to relevant nuclear infrastructure based on research reactors to achieve their capacity building and R&D objectives. IAEA said KAERI would provide scientists from around the world access to its research reactor and facilities for training and R&D.

"It is a case that once again demonstrated the international status of our nuclear technology," KAERI President Park Won-seok said. "We will establish a solid international network on nuclear reactors for research purposes and prepare a bridgehead for exports."

KAERI's high flux advanced neutron application reactor (HANARO) began normal operations in January 1996, using low enriched uranium for fuel. The reactor is now one of six IAEA-designated ICERRs, together with facilities in France, Russia and Belgium as well as two in the United States.

IAEA described HANARO as a "highly versatile" research reactor which can be used for applications ranging from neutron activation analysis to the testing of new nuclear fuel types. IAEA's designation includes facilities for the use of cold and thermal beam, isotope production facilities, research materials testing facilities and a nuclear energy education center.

"The ICERR scheme is designed to foster international cooperation and contribute to capacity building by facilitating access to world-class research reactors and associated facilities," Feruta said in a press release published on IAEA's website. "Member States may establish bilateral arrangements with ICERR host countries for education and training activities as well as research and development in a range of areas of nuclear science and technology."

The operation of HANARO with a thermal power capacity of 30 MW has been on and off since its interruption in July 2014. Seismic reinforcement has been done after a joint governmental inspection that followed the devastating meltdown at Japan's Fukushima nuclear power plant.