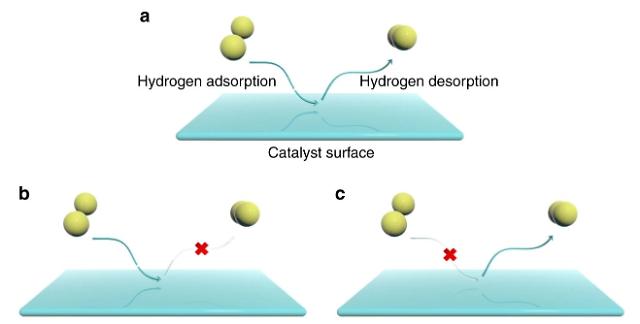 [Courtesy of the Ulsan National Institute of Science and Technology (UNIST)]


SEOUL -- South Korea has been in a hectic drive to accelerate the utilization of hydrogen as a new power source to reduce its heavy dependence on imported oil, but the speed of progress was slow due to the lack of infrastructure. Vital parts such as catalysts are very expensive as they require rare earth materials such as platinum.

Researchers at Ulsan National Institute of Science and Technology (UNIST) claimed to have synthesized a new catalyst that is more power-effective and affordable. The new catalyst, which comprised of iridium (Ir), nitrogen (N) and carbon (C), generates hydrogen at a lower overvoltage, the minimum energy level required to trigger hydrogen evolution reaction (HER), than conventional catalysts.

The UNIST team led by professor Baek Jong-beom used a calculation method that is capable of checking the shape of electrons and amount of energy inside an atom to effectively control the adsorption and desorption energy of iridium. While iridium is cheaper than platinum, it requires more energy in the adsorption process. To reduce power consumption, researchers have aligned carbon and nitrogen, which draw electrons, around iridium part of the catalyst, strengthening the adsorption ability.

"The price competitiveness of expensive iridium can be achieved if it is used only in small quantities and the use of this method can also help design other metal-based catalysts," Baek was quoted as saying. Electron shells were used to improve the effectiveness of a catalyst instead of synthesizing new matters in blind pursuit of increasing performance.

The research findings were published in this month's issue of Nature Communications, a scientific journal.