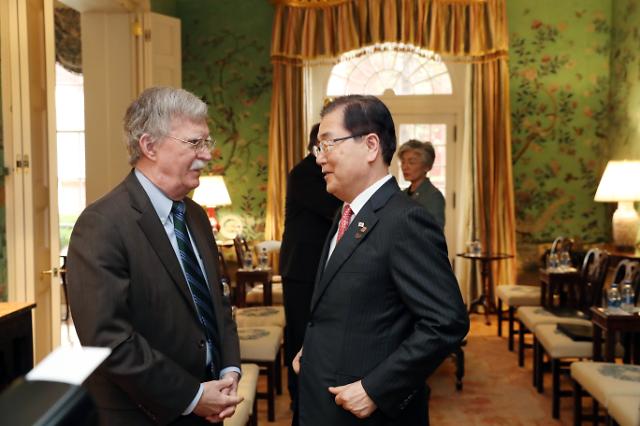 Bolton, who was dismissed earlier this month by President Donald Trump due to clashes over North Korea policy and other issues, made the remark at a forum in Washington as he aired his concerns about the dispute's potential impact on trilateral security cooperation with the U.S.

"It's well below the radar screen here in the United States, which is a big mistake for our country in not paying more attention to it," he said during a forum at the Center for Strategic and International Studies. "I am almost without words to describe how distressed I am that these tensions between South Korea and Japan have grown to the point where they currently are."

Bolton was referring to the tit-for-tat trade war between Seoul and Tokyo, which began in July following Japan's adoption of export controls against South Korea in apparent retaliation for a South Korean court ruling against Japan's use of forced labor during its 1910-45 colonial rule of the Korean Peninsula.

In August, the dispute escalated with South Korea's decision to withdraw from a military intelligence-sharing pact with Japan seen by the U.S. as a platform for trilateral cooperation against North Korea's nuclear threats and China's military rise.

"I believe that over the past period of time that American passivity on this point has been a mistake," Bolton said, adding that he is not advocating for Washington's public mediation between its two East Asian allies. "But I think if the United States does not operate here, we face a very serious deterioration of alliance capabilities at precisely the wrong time."

The former adviser stressed that what the U.S. needs is a richer, deeper cluster of alliances in the Asia-Pacific region, and to see South Korea and Japan moving in the opposite direction is "extraordinarily troubling" for the U.S.

He noted, in particular, that South Korea's decision to end the General Security of Military Information Agreement with Japan has a "palpable impact on American ability to coordinate among our various allies."

"I put this down as something that requires urgent attention by the United States," Bolton said. "I think there's an awful lot of work to do in trying to get this back on track, and I'm not even sure at this point I would know where to begin." The longer the dispute continues, however, it "weakens all three of us further."

Bolton also noted that in the context of the risks and dangers surrounding the Korean Peninsula, there should be better burden-sharing between Seoul and Washington to shoulder the cost of running U.S. military bases in the South.

The issue of burden-sharing has emerged as a key issue of contention under Trump, who demands that U.S. allies pay more for their defense, and there have been reports that the U.S. wants South Korea to pay US$5 billion under next year's cost-sharing deal, known as the Special Measures Agreement. This year's SMA requires South Korea to pay 1.04 trillion won ($871 million), an increase of 8.2 percent from the previous year. Negotiations to renew the deal began last week in Seoul.

"It's not inappropriate to ask for people to pay a fair share of the cost," Bolton said, noting that the current situation calls for more U.S. involvement and leadership on the Korean Peninsula and worldwide. "So I would say to Korea and Japan I think there will be, there should be a rebalancing," he added. "If you're going to negotiate it out, an opening bid of whatever number is an opening bid; see what happens. But don't think it's business as usual."
(Yonhap)