Ex-PGA player banned for 3 years for flipping off crowd over camera noise: Yonhap 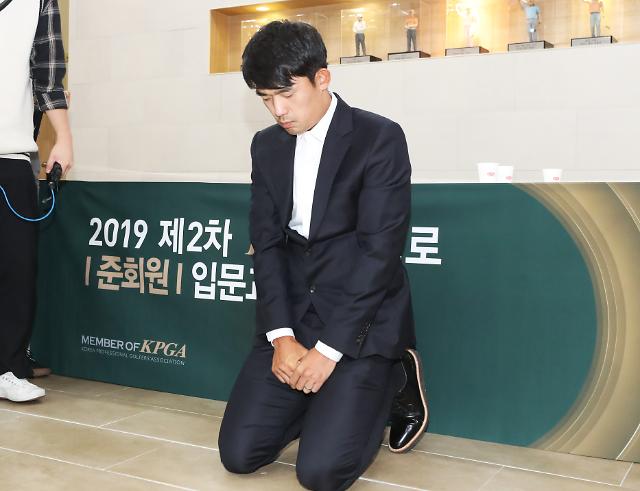 Kim Bi-o apologizes on his knees after attending a disciplinary hearing at the Korea Professional Golfers' Association headquarters on Oct. 1, 2019. [Yonhap News Photo]


SEOUL -- A former PGA Tour player has been suspended for three years by the domestic circuit for raising his middle finger at the crowd over cellphone camera noise during a recent tournament.

The Korea Professional Golfers' Association (KPGA), which operates the Korean Tour, said Monday that Kim Bi-o will not be eligible to play for the next three years, effective immediately. Kim was also fined 10 million won ($8,350).'

Kim won the DGB Financial Group Volvik Daegu Gyeongbuk Open in Gumi, 260 kilometers southeast of Seoul, on Sunday to become the first two-time winner on the tour in 2019. Kim also leads the tour in money and the Player of the Year points. But the victory was marred by the incident at the 16th tee, where Kim reacted angrily to the sound of a cellphone camera going off on his downswing.

Kim, who was nursing a one-stroke lead, sent his tee shot only about 100 yards. He then turned to his right and flipped the bird in the direction of the crowd and slammed down his driver in anger. The moment was captured on live television.

After holding on for the victory, Kim apologized for losing his cool, saying he'd been particularly sensitive with noise down the stretch because he was running on fumes. Kim also said he'd accept whatever punishment the tour would hand down.

Kim swept the Korean Tour's Player of the Year and Rookie of the Year in 2010, while also taking home the money title and scoring title. He earned his PGA Tour card for 2011 through the qualifying tournament but lost it after one season. He spent a couple of seasons on the developmental Web.com Tour (currently Korn Ferry Tour) before returning to the Korean Tour full-time in 2014.

The KPGA typically doesn't disclose details of its disciplinary measures against players, but it decided to make an exception in this case to send a message to the rest of the tour. After attending the disciplinary hearing, Kim knelt down in front of cameras and apologized to golf fans once again. Asked if he had indeed been bothered by the camera noise, Kim, fighting back tears, refused to make any excuse and said, "I'll leave everything to the KPGA."
(Yonhap)