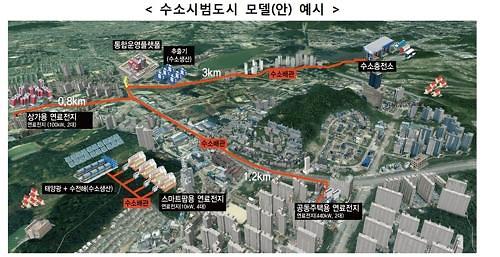 SEOUL -- South Korea will have three urban areas based on a state-funded full hydrogen fuel ecosystem equipped with production, storage and transport by 2022 in an effort to speed up a campaign aimed at utilizing hydrogen as a new power source.

The Ministry of Land, Infrastructure and Transport said Thursday that three sites would be selected in December from an urban area of up 10 square kilometers (1,000 hectares) to build infrastructure for a hydrogen ecosystem including fuel cells, pipelines and a control center.

Energy used in lighting, heating and operations of the demonstration areas will be produced with hydrogen fuel that would power clean energy vehicles. The ministry plans to turn 10 percent of South Korea's land including towns into hydrogen cities by 2030. President Moon Jae-in has led a national campaign to adopt hydrogen fuel cells and electric batteries as a mainstream fuel in the future, with a roadmap to produce 6.2 million fuel cell vehicles for domestic consumption and exports by 2040.

Because of its eco-friendly characteristics, fuel cells are considered the next-generation renewable power source, but hydrogen fuel faces an obstacle due to the lack of charging stations in urban areas. Consumers are still worried about their safety. Hydrogen storage tanks exploded in May when a small fuel-cell power system was on a test operation in the eastern port city of Gangneung, leaving two dead and six others injured.

The explosion was strong enough to shatter the windows of a building about 100 meters away. It underscored the importance of implementing safe equipment design and construction as well as proper procedures for handling hydrogen. Liquid hydrogen is sometimes used as an extremely condensed hydrogen fuel. Hydrogen is lighter than air and diffuses rapidly, but it can behave dangerously under specific conditions.