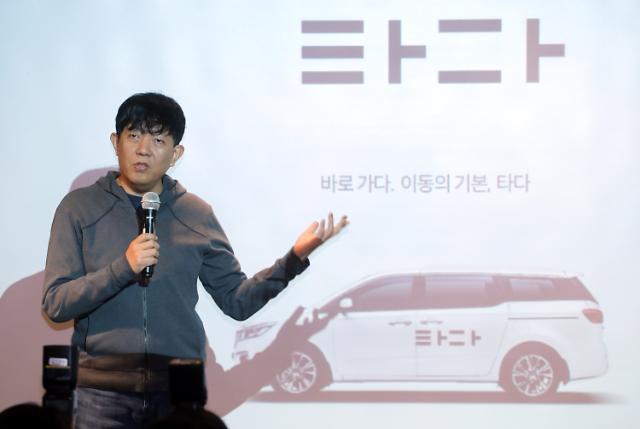 
SEOUL -- A pioneer in South Korea's mobility service market grumbled at an outdated regulatory barrier and questioned a government drive to nurture startups in a sarcastic manner after state prosecutors indicted him over the operation of Tada, a smartphone-based ride-hailing service that has gained popularity for convenient and affordable transportation.

Tada has rapidly grown to become South Korea's leading ride-offering service since it was officially launched using 11-seat multi-purpose vans in October last year in Seoul and its satellite cities. The service is run by Value Creators & Company (VCNC), which is a unit of SoCar, a mobility service platform operator.

Tada's service was in trouble on Monday when prosecutors indicted SoCar CEO Lee Jae-woong and VCNC head Park Jae-uk who should stand trial without being detained. Prosecutors ruled in favor of tax drivers, saying Tada is not a type of rental car service but a paid taxi service.

The indictment coincided with President Moon Jae-in's speech at DEVIEW 2019, a tech conference in Seoul. Moon promised to unveil a new national strategy for the development of artificial intelligence and ease a regulatory barrier drastically so that scientists, engineers, artists and students can develop artificial intelligence "the fastest in the world."

"I will create a yard where you can freely imagine, work together and make a challenge," Moon said, adding that policy funds would be funneled into "start-ups that will determine our future and create an industrial ecosystem where innovation continues constantly."

Quoting what Moon said at the tech conference, the SoCar head deplored his indictment, saying the government has not told him to stop Tada's operation for a year. "This is a service, which has more than 1.3 million users and hires 9,000 drivers, and is a mobility company which applies AI technologies, in reality, most widely," Lee wrote on his Facebook page.

"The world is changing with the demand for the benefit of the people and the development of new technology. We look forward to the court's wise judgment," said Lee, who was accused of carrying out a passenger car transport business without a license. Violators can receive a jail term of up to two years or a fine of up 20 million won ($17,094).

Taxi drivers in Seoul filed a complaint against the two businessmen in February, insisting Tada was engaged in illegal taxi service and violated the law that forbids rented vehicles from offering rides in exchange for money. Tada argued its business is within legal boundaries based on a written exception that specifically allows rented vans or vans with 11 to 15 seats to be offered with drivers.

In a caucus on Tuesday, Choi Un-yeol, a legislator from the ruling Democratic Party, accused prosecutors of taking action without "sufficient social discussion" and said South Korea would inevitably fall behind in global competition if "enumerative standards" are applied to new industries. "Who can prepare for innovative projects if the law is used immediately without sufficient social discussion?"

To develop future mobility platforms and enhance service quality, SoCar has won a series of investments from foreign and domestic investors. On October 7, Tada announced plans to develop an AI-based data platform that would effectively analyze big data to estimate customers' demands and control vehicle supply.

Startups have benchmarked SoCar. Kakao Mobility, the mobility wing of South Korea's web service giant Kakao, provides a taxi-hailing service that automatically distributes taxis to customers without the need of revealing a destination.

Originally, Kakao Mobility had tried to launch a ride-hailing service in December last year, but the service had to be suspended due to strong protests by taxi drivers. The mobility company and taxi industry representatives came to a dramatic settlement in January this year through government-brokered negotiations to allow the operation of Kakao's taxi franchise brand, Waygo Blue.

South Korea's ride-sharing and car-hailing services remained stagnant due to strong objection by taxi drivers who have complained about low income, excessive work and poor working conditions. Government data showed that there are more than 250,000 taxis in South Korea with drivers in Seoul working for an average of 12 hours a day and earning an average of about 2.1 million won ($1,780) a month.