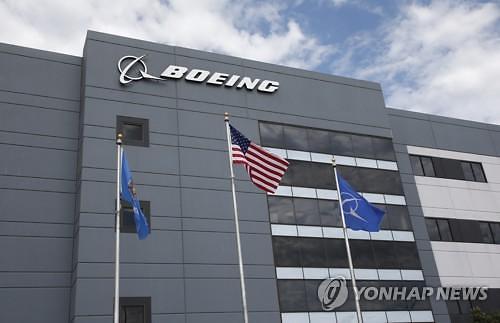 
SEOUL -- Boeing opened a research center in South Korea that would develop future new technologies in aviation, such as autonomous flights, artificial intelligence and personal air vehicles. The move came amid growing interest among South Korean companies in air taxis, which are seen as urban mobility in the future.

An opening ceremony took place Friday at the office of the Boeing Korea Engineering & Technology Center (BKETC) in southern Seoul, according to the Ministry of Trade, Industry and Energy. BKETC, the seventh of its kind in the world, is in charge of developing future technologies such as smart cabins, next-generation aviation electronics, advanced manufacturing and smart factories, autonomous flights and AI.

At Friday's ceremony, Boeing signed a memorandum of understanding on cooperation in technological development with the Korea Evaluation Institute of Industrial Technology (KITECH), a state research institute which helps develop technologies.

The ministry said the center would serve as an opportunity for South Korea to upgrade its aviation industry, acquire preemptive technologies and establish an industrial ecosystem for new industries such as personal air vehicles (PAVs).

PAVs are emerging as a future system of travel to avoid traffic jams on urban roads as the doorstep-to-doorstep average speed for cars is predicted to degrade further. An air taxi is a small commercial aircraft which makes short flights on demand. Startups as well as global giants such as Airbus, Boeing and Uber are vying to develop PAVs and autonomous air taxis.

Boeing's autonomous PAV prototype, developed with the assistance of Aurora Flight Sciences, first flew on January 22 in Manassas, Virginia. The aircraft has twin booms each supporting four lift rotors slightly angled alternatively outward and inwards, a pusher propeller and the rear wing has vertical surfaces at each end.