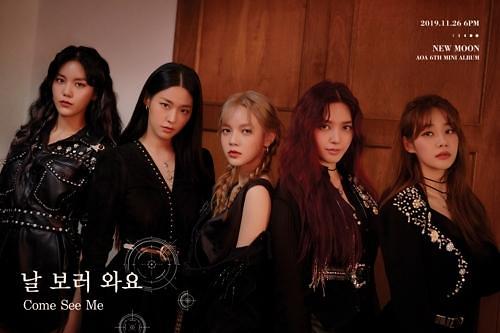 
SEOUL -- Ace of Angeles (AOA) will come back as a five-member girl band this month with "New Moon", the first album to be released after the seven-year-old group experienced a line-up change.

FNC Entertainment said AOA's six mini-album, New Moon, would be released on November 26. The poster of the album's title track, Come See Me, was carried on the group's official Instagram on Thursday. The band's fifth mini-album, Bingle Bingle, was released in May last year.

AOA debuted in 2012 as an eight-piece group with the release of Angel's Story. The group is now composed of five members: Jimin, Yuna, Hyejeong, Seolhyun and Chanmi. Youkyung departed in 2016, followed by Choa in 2017 and Mina in May 2019.