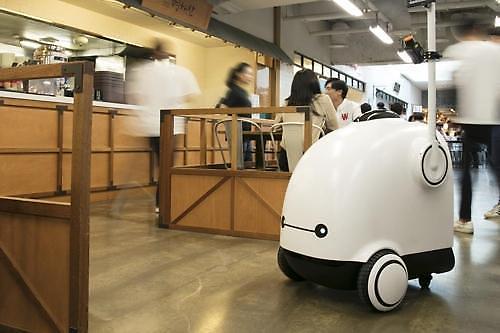 
SEOUL -- Woowa Brothers, the operator of South Korea's biggest food delivery service app, has launched a rental program to provide its service robot, Dilly, to restaurants. Dilly can carry food for four tables at a time to customers and return dishes and trays back to the kitchen.

The operator of Baedal Minjok said in a statement on Monday that subscribers of its rental program will be charged 900,000 won ($773) a month under a two-year contract. The average monthly salary for restaurant service workers is 1.68 million won, according to the Ministry of Employment and Labor.

"If the number of restaurants adopting serving robots increases rapidly, more people will be able to experience robot services in daily life," Woowa Brothers said, adding a private restaurant owner or a corporate can receive consulting for the use of Dilly, which was first introduced in June last year.

Woowa Brother's goal is to operate delivery robots similar to Dilly on streets to carry food. The company would gradually increase the difficulty of the testing environment for delivery robots by testing them on actual roads and pedestrian walks.

South Korea's food delivery service market is backed by some 200,000 workers who use the transportation of motorcycles. Smartphone apps are used widely so that customers can order lunch boxes, salads and side dishes from local restaurants as well as food from special non-delivery restaurants.

Drones have gained attention in South Korea because of their versatility. In 2016, Yogiyo, a food delivery company, made a successful test flight of an auto-piloting food delivery drone in an urban apartment complex. However, the commercialization of drone food delivery services has a long way to go due to technical and other problems.