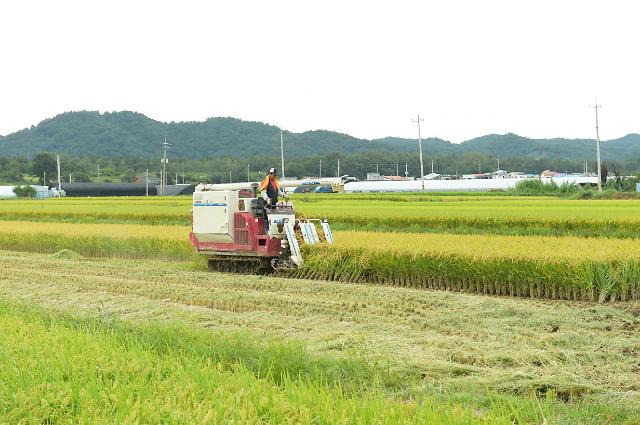 SEOUL -- The United States and four other rice exporters have allowed South Korea to maintain a 513 percent tariff rate on imported rice at least until the World Trade Organization works out new rules, probably reflecting dwindling rice consumption and strong objection by farmers in the domestic market.

South Korea has imposed 513 percent tariffs on imported rice for quantities outside the obligatory quota of 409,000 tons of rice imports carrying a five percent tariff rate under the tariff-rate quota (TRQ) system meant to provide minimum market access. The verification of tariffication began in 2015 in protest from five rice exporters -- the U.S., China, Australia, Thailand and Vietnam.

Verification has been completed this year, and South Korea approved an agreement with the five countries at Tuesday's cabinet meeting, according to the Ministry of Agriculture, Food and Rural Affairs.

"513 percent is a high tariff rate that can reliably protect the domestic rice market, and the possibility of additional rice imports other than TRQ is very low," Vice Minister Lee Jae-ouk told reporters, adding rice imports for ordinary consumers are inevitable due to protests against the use of imported rice mostly for processing.

"In consideration of this issue, some imported rice for the consumer market is inevitable," Lee said. Imports of rice for ordinary consumers have decreased from 120,000 tons in 2014 to 40,000 tons in 2017 and last year.

U.S. President Donald Trump has pushed for substantial progress in overhauling WTO rules so that self-declared developing countries do not take advantage of special and differential treatment. Until a new round of negotiations is concluded, South Korea will maintain its developing country status in imports of sensitive items such as rice.

Rice is still the main source of daily calories, but annual rice consumption has been on the decline, leading to a surge in the rice inventory. The government has provided subsidies to farms and purchased oversupplied rice as compensation for falling prices. State warehouses are packed with rice reserves, far higher than 800,000 tons recommended by the Food and Agriculture Organization.