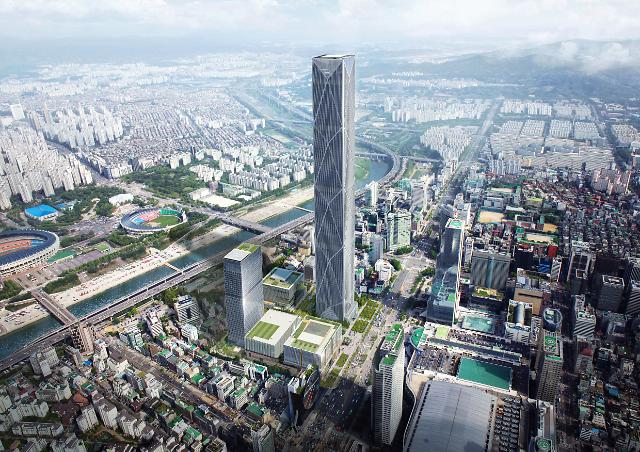 SEOUL -- A Hyundai auto group project to build South Korea's tallest skyscraper secured final approval, which has been delayed due to security concerns raised by the operator of an important airbase for U.S. and South Korean military aircraft. Construction of the 569-meter-tall building is to begin in the first half of 2020.

The Seoul city government said Tuesday that it has issued a building permit for the Global Business Center (GBC) for Hyundai Motor's new headquarters to be located in Samsung-dong in southern Seoul. The highest two floors of the skyscraper will be used as an observatory.

The greenlight came after Hyundai Motor signed an agreement with the Defense Ministry to take responsibility for the cost of resolving operational restrictions in stages. Construction was to begin in the first half of 2018, but state approval was put off after the defense ministry demanded an assessment of air traffic safety and radar interference because it would be built near a military airbase at the southern outskirts of Seoul.

Military officials say air defense artillery batteries and radar sites are located in and near the base, which has been used by strategic U.S. and South Korean military aircraft as well as presidential planes.

Hyundai's skyscraper would be 14 meters (46 feet) higher than the 555-meter-tall Lotte World Tower which opened in April 2017 as South Korea's new high-rise landmark. The tower had triggered similar concerns that it could endanger the safety of flights.​