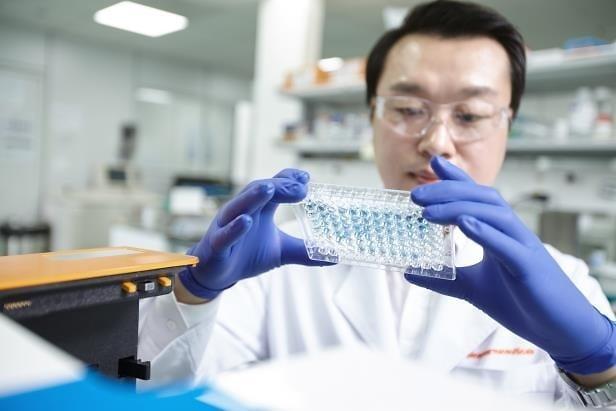 SEOUL -- SK Biopharmaceuticals has received U.S. approval for the clinical first phase test of its new drug SKL24741, which would be the company's second treatment for epilepsy following Xcopri (cenobamate), a new anti-epileptic drug which would be available in the American market in the second quarter of next year.

SK Biopharmaceuticals said Tuesday that the U.S. Food and Drug Administration (FDA) has approved an investigational new drug (IND) application for SKL24741. The first phase clinical test will be made through SK Life Science, the U.S. unit of SK Biopharmaceuticals, starting in 2020. The company has developed drugs for the treatment of central nervous system disorders.

"We will continue to strengthen our new drug pipeline to become a leader in the central nervous system sector," SK Biopharmaceuticals CEO Cho Jeong-woo said in a statement. "We will develop various treatments in the field of epilepsy."

In February, Arvelle Therapeutics, a European company, reached an exclusive licensing agreement to develop and commercialize Xcopri which would dramatically decrease median seizure frequencies. The South Korean company would receive an upfront payment of $100 million and is eligible to receive up to $430 million upon achievement of certain regulatory and commercial milestones in addition to royalties on net sales generated in Europe.

On November, 26, Cho said his company aims to sell Xcopri in the U.S. market within the second quarter of 2020. SK Life Science will be responsible for direct sales and marketing. "When sales start in the second quarter of next year, it will be distributed to all U.S. sales channels and pharmacies," Cho said, adding the new drug has an excellent effect of dissipating seizures, which is necessary for patients with intractable epilepsy.