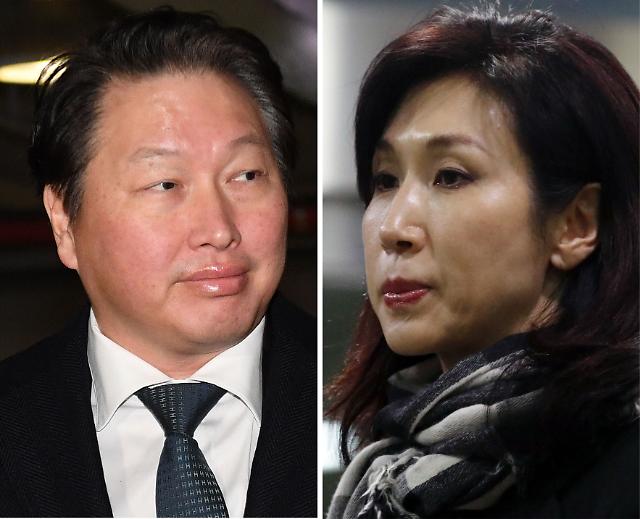 
SEOUL -- The estranged wife of Chey Tae-won, the chairman of South Korea's third-largest conglomerate SK Group, changed her mind to accept a divorce after she launched a legal battle for an asset division, four years after the breakdown of their marital life was made public through Chey's revelation that he had a child out of wedlock.

Chey, 59, filed a request with a Seoul court seeking a divorce settlement with his wife, Roh So-young, in 2017, after he admitted in a letter published by a local magazine in 2015 that he maintained an extramarital relationship while his marital life remained bumpy for more than 10 years. Roh, 58, had refused to accept a divorce.

In a Facebook post that came on Wednesday after she filed a lawsuit for an asset division, Roh disclosed her decision to end her marriage that began in 1988, saying she would go solo and find a new life because her son and two daughters have already grown up. As director of Art Center Nabi, a contemporary art gallery in Seoul, she has organized various exhibitions and cultural projects.
.
"The past years have been a time of trying to build and keep a family," Roh said. "Even when I had a hard and humiliating time, I waited with a ray of hope, but now I can't see any hope," she said, adding the rest of her life would be devoted to finding a way to contribute to society. "Now I think it's right to let my husband find the happiness he so desperately wants. I believed that I should protect my family even at the risk of my life, but now I want to expand 'home' into a larger community."

Roh So-young is the daughter of Roh Tae-woo, a former army general who served as president from 1988 to 1993 after joining a 1979 coup led by his military colleague and predecessor, Chun Doo-hwan. The two ex-presidents were convicted in 1996 of mutiny, treason and corruption for their roles in the coup and the bloody military crackdown on a pro-democracy uprising in the southern city of Gwangju in 1980. Both were released from prison in December 1997 on a presidential pardon.