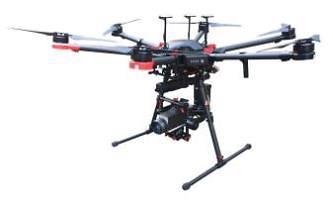 SEOUL -- Seoul, the South Korean capital crowded with 9.73 million residents, will use a special monitoring team equipped with drones to crack down on illegal emissions of pollutants at factories and construction sites amid widespread public concerns about fine dust and air pollution.

The Seoul city government said on Thursday that a team of six workers used two drones for its first mission to check illegal emissions in southwestern Seoul. The drones collect samples in the air from chimneys and construction sites from December through March.

Along with administrative actions, violators will be fined. The air quality of Seoul gets worse in the winter season due to pollutants known as fine dust. Seoul City plans to monitor some 4,000 factories and construction sites.

In South Korea, drones have been used to monitor wildfires and people stranded in the woods. At a national park in the southern resort island of Jeju, two surveillance drones are used to catch smokers or those who trespass in restricted areas.