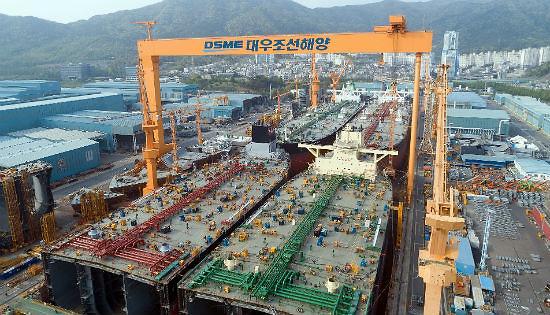 SEOUL -- Daewoo Shipbuilding & Marine Engineering has secured a $200 million order from its long-time American client, Chevron, to build a semi-submersible offshore platform capable of producing 75,000 barrels of crude per day in the Gulf of Mexico. It was the shipyard's first offshore plant order in five years.

The order was part of a 2016 basic offshore plant agreement between Chevron, an American energy corporation, and Daewoo Shipbuilding & Marine Engineering (DSME). The shipbuilder has dispatched a team of design experts to Houston to participate in basic design since March.

With the new deal, DSME's total orders so far this year stood at $5.95 billion. The shipbuilder has secured orders for 10 LNG carriers, 10 crude carriers, five container ships, five submarines and one offshore plant.

DSME received its last oil production plant order worth three trillion won in 2014 from TCO, a consortium of oil majors including Chevron and ExxonMobil, to build modules for production facilities in the Tengiz oilfield in Kazakhstan's low-lying wetlands along the northeast shores of the Caspian Sea.

Hyundai Heavy Industries, the world's largest shipbuilder, will run DSME under the same roof of a new corporation. The merger followed years of painful restructuring in South Korea's embattled shipbuilding industry, which has been hit by dwindling orders, a prolonged business slump and a strong challenge from Chinese shipyards. DSME has suffered from financial difficulties caused by deferred deliveries of offshore plants.