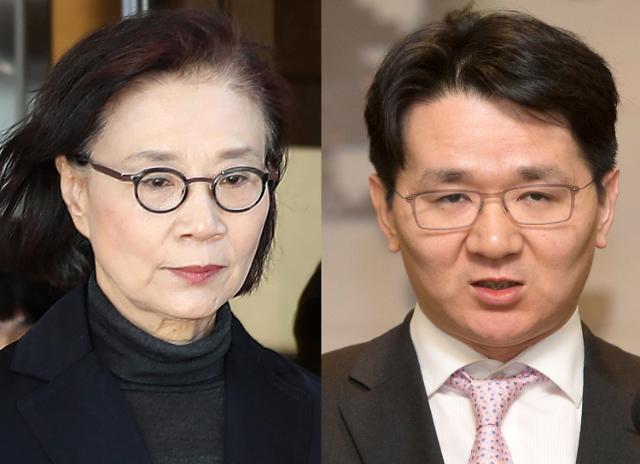 SEOUL -- In an effort to dispel misgivings about group leadership, Hanjin Group's new chairman Cho Won-tae and his nosy mother made a joint apology for their argument precipitated by a family feud that came eight months after the sudden death of the group's late patriarch. They promised to work together for family harmony.

In a joint statement published on Monday, the new chairman and his 70-year-old mother, Lee Myung-hee, apologized for causing many people to worry about "an unsavory incident" on Christmas and pledged "family harmony in the future" by following a death-bed counsel from the group's late chairman, Cho Yang-ho. The new chairman extended a deep apology and his mother accepted it "from the bottom of her heart."

At the widow's home on December 25, the new chairman allegedly had an argument over group management and her mother suffered minor injuries when Cho Won-tae left his seat in anger and a vase in the living room was broken.

The family quarrel came two days after Cho Hyun-ah, a former Korean Air vice president known for a "nut rage" incident in 2014, criticized her brother for running the group without prior consultations with family members. "As a result, Hanjin Group is heading in a different direction than the teachings led by its former late chairman," she said in a statement published by her legal representative.

Mindful of a public backlash ahead of a regular meeting of shareholders in March next year, the group said the dispute should not hurt efforts to enhance corporate value and restore public trust. Cho Won-tae needs help from his family to win confidence from shareholders.

As head of Hanjin-KAL, the group's de facto holding company, Cho Won-Tae, 43, was officially designated by the Fair Trade Commission (FTC), a state anti-trust watchdog, as group chairman in May to succeed his father who died on April 8. By inhering the late chairman's stake, Cho Won-tae owns 6.46 percent of Hanjin-KAL, Cho Hyun-ah 6.43 percent, Cho Hyun-min 6.42 percent and their mother 5.27 percent.

Lee has been widely criticized as a typical example of "Gapjil" which means an abuse of power such as mistreatment, arrogant behavior, crude talk, character assassination, and insults. She allegedly hurled a pair of pruning shears at a security guard in his house for failing to take care of the house door properly, kicked a chauffeur for a mistake in the street, beat a gardener and slapped a construction worker.