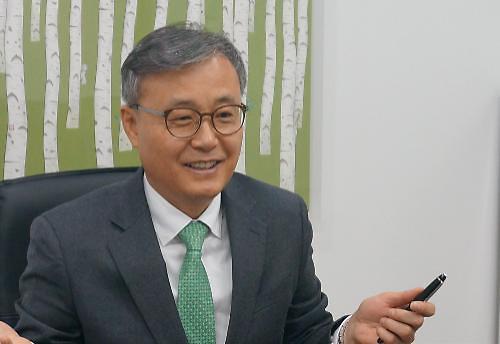 SEOUL -- It's not easy to change deep-rooted preconceptions among picky South Korean consumers about Chinese products, but Shinwon CK Motors, a key importer based in Seoul, is full of confidence that Chinese cars will be recognized by "reasonable" consumers after all to outshine other imported brands like Mercedes-Benz.

"In the end, our goal is to become the top seller in the imported car market. I am sure that there will be more and more rational customers to recognize Chinese cars," said Shinwon CEO Lee Kang-soo who only sells Chinese cars such as FENGON ix5, a mid-size crossover utility vehicle produced by Dongfeng Xiaokang, a subsidiary of Dongfeng Motor, through a nationwide network.

When ix5 was unveiled in South Korea in October, Shinwon sold the initial batch of 100 units in a week. While sales are still small compared to other imported car brands, it is a remarkable achievement, Lee said, pointing to a biased perception among South Korean consumers about Chinese products.

Working at the dissolved Daewoo group, Lee launched South Korea's first city car, Tico, which was produced from 1991 to 2001. At the time, Daewoo had to fight the prejudice that Tico was not safe, Lee said, adding it took more than three years to change a preconceived public notion despite various benefits.

"It will also take some time for China to change preconceptions," Lee said. "This is because (consumers) still tend to equalize cars with their status, although there are many Chinese companies that have enhanced technology and the technology of Chinese automakers has grown." He said that Mercedes-Benz took more than 15 years to settle as the top imported brand in South Korea. "The same is true of China's cars. It will take time, but in the end, they will be recognized by customers who spend reasonably."

Shinwon has designated 125 maintenance companies in an effort to break the prejudice, Lee said, pointing to his strategy to provide full after-sales services. He disclosed the goal of selling 3,0000 Chinese cars in 2020 by introducing a variety of models.

There are other Chinese carmakers trying to sell their products in the competitive South Korean market, which is seen as "a kind of testbed," Lee said, adding that Chinese companies think that they can satisfy customers around the world if they win over South Korean consumers. "I am confident that there will be more and more reasonable customers to recognize Chinese cars."

Lee predicted the rapid growth of Chinese cars in the future thanks to Beijing's various and active policy support for the early introduction of new eco-friendly vehicles. "If global trends change with new energy and self-driving cars, China will eventually lead the market with national support. China is already on part with the U.S. in self-driving technology."

"The Chinese market is already changing rapidly. There are more than 100 car companies in China, with various new cars pouring in every month."

Other Chinese brands like BAID and BYD seek to tap into the South Korean auto market. In early 2017, Kenbo 600, a mid-size SUV produced by BAIC Yinxiang Automobile, a joint venture between the Beijing Auto (BAIC) and the Yinxiang Motorcycle, became the first Chinese passenger car to be sold in South Korea. The price was much lower than South Korean cars, but the Chinese model largely failed to satisfy consumers.

(This interview was conducted by Aju News reporter Kim Hae-won)