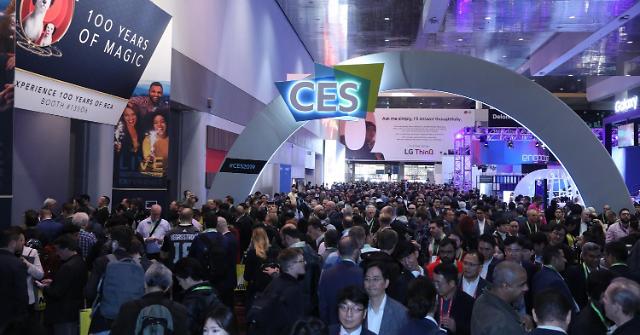 SEOUL - More than 4,500 companies from over 160 countries will attend this year's Consumer Electronics Show (CES) to be held in Las Vegas from January 7 to 10. The world's largest information and communication technology exhibition is expected to attract some 180,000 visitors throughout the world.

CTA thinks that the digital age, which began in the 2000s, will enter the age of data in 2020 after passing through the age of connectivity in the 2020s. The centerpiece of the era of data is artificial intelligence (AI) and 5G (5th generation mobile communication), which are converged with various technologies to drive the development of virtual reality (VR), augmented reality (AR), internet of things (IoT), smart city, autonomous driving and the robot industry.

In particular, CES 2020 is significant as it is the first exhibition to be held after 5G services were commercialized in South Korea, the United States and China. 5G was also selected as a technology trend last year, but there was a limited exhibition of related services. This year, a lot of 5G-related services will be shown thanks to commercialization.

It's Huawei which issued a challenge at a time when Qualcomm exclusively supplies semiconductors which are the heart of 5G smartphones. Huawei is currently under strong sanctions from the US government. The competition for technological hegemony over 5G between the U.S. and China has expanded into a trade war. The evolution of autonomous driving and mobility technologies is impossible without 5G. Gaming, entertainment and sports broadcasting are also playing a major role in XR (a combination of VR, AR and mixed reality) based on 5G networks. Drones, which are next-generation transportation means, are part of services based on the dissemination of 5G. The newly emerging healthcare and food tech sectors are also expected to grow through the convergence of 5G and AI.

The convergence of 5G, AI and related technologies is directly connected to profit models of companies, but It has become an era in which companies cannot simply seek profits. There is a growing voice that technology needs to be developed in consideration of environment, social responsibility and governance (ESG) as well as sustainable development goals (SDGs) to solve social problems.

For example, the "realization of a safe digital society" and the "creation of a livable city" are very relevant social tasks. To solve these challenges, smart cities utilizing 5G, AI, and blockchain technology are needed. It's time for technology to exist for solving social challenges.

(If we look at CES 2020 from this perspective, we can see the ‘forest’ of innovation to solve social problems beyond the ‘tree’ of individual companies. Aju News Corporation has formed a special team with The Milk, a U.S. media startup, to create content for CES 2020 and give a vivid picture of the IT transformation scene through online and video content as well.)