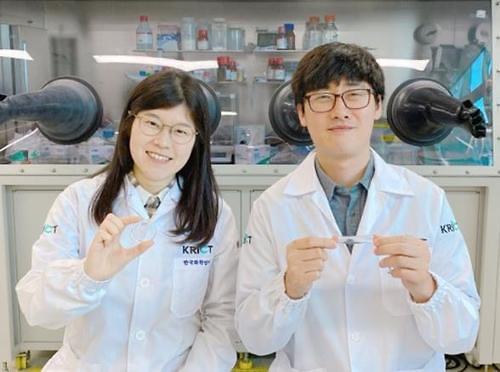 SEOUL -- A South Korean research team claimed to have developed a regenerable sensor that can heal itself from cuts and scratches. It can be used for wearable devices such as smartwatches which are widely used to check physiological status. Existing sensors installed in wearable devices are brittle and easy to break.

The Korea Research Institute of Chemical Technology (KRICT) said in a statement on Tuesday that its researchers have developed a regenerable sweat-detecting sensor capable of healing damage in less than 30 seconds.

"The newly developed sweat-detecting sensor can be used for diagnosing myocardial infarction, muscle spasms and hypersensitivity by measuring the concentration of potassium, sodium and hydrogen," KRICT researcher Hwang Sung-yeon was quoted as saying.

The sensor used a supermolecule composite of citric acid and succinic acid to feature its regenerable ability. The institute said the sensor's healing ability is about four times greater than that of the sensor, developed by China's Sichuan University, which took two minutes to regenerate itself.