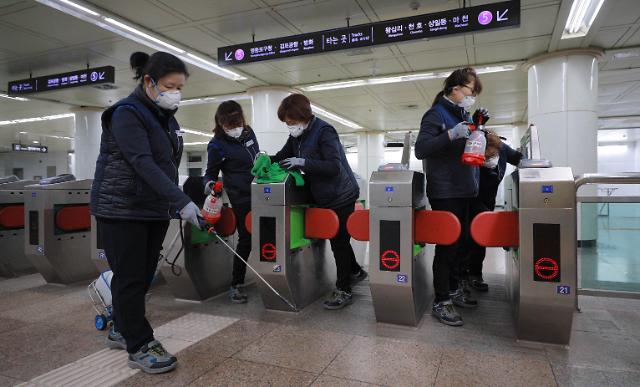 Subway station workers sanitize the entrance to a station platform in central Seoul on January 28. [Photo by Yoo Dae-gil = dbeorlf123@ajunews.com]

SEOUL -- Some 3,000 people who have traveled from Wuhan, the epicenter of China's highly contagious coronavirus infection, in the last two weeks, were put under obligatory health inspection in South Korea after President Moon Jae-in called for strong pre-emptive measures to prevent the spread of the deadly novel virus.

As of Tuesday, South Korea has reported four patients infected with the virus that has killed more than 100 people in China. Government data showed that 3,023 people including 1,166 Korean nationals have arrived from Wuhan from January 13 and 27, according to the Korea Centers for Disease Control and Prevention (KCDC), a state health agency.

They should be put under obligatory tests from Tuesday, KCDC director Jeong Eun-kyeong told reporters, adding anyone showing related symptoms would be quarantined immediately at designated medical centers.

About 170 people who had been in close contact with the four infected patients are under close watch by health authorities, with 15 others being tested, Jeong said.

Education authorities advised all schools in Seoul to suspend classes or extend their winter vacation. Chartered planes will be sent this week to bring home hundreds of Korean nationals who have been stranded in Wuhan since China imposed a lockdown on the Chinese city.

Chinese scientists have linked the disease to coronaviruses, the same family as the deadly SARS and MERS viruses belong to. The outbreak of unknown viral pneumonia in Wuhan sparked a global health alert.