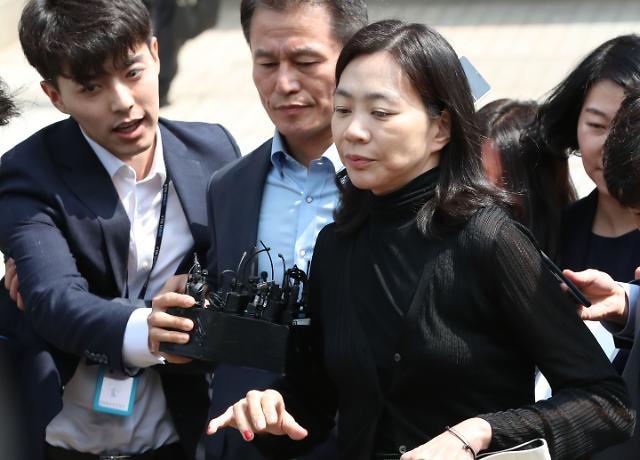 SEOUL -- Cho Hyun-ah, a former Korean Air vice president known for a "nut rage" incident in 2014, raised the standard of revolt to kick out her brother by joining forces with an activist private equity fund which has consistently sought to change corporate governance of the scandal-stricken conglomerate.

A three-way alliance was announced on Friday by Cho Hyun-ah, KCGI and Bando Engineering & Construction, which together hold more than 30 percent of shares in Hanjin-KAL, the holding company of Hanjin Group. They agreed to vote together against Hanjin's new chairman Cho Won-tae, 44, at a meeting of shareholders in March.

Cho Hyun-ah, 45, and her partners revealed their clear intention to expel the new chairman, who officially took the helm in May last year to succeed his late father, saying the group should be run by professional managers to improve its governance structure and enhance the interests of ordinary shareholders.

"At the upcoming shareholders' meeting of Hanjin KAL, we agreed to actively cooperate in activities for the growth and development of Hanjin Group, such as exercising voting rights and offering shareholder proposals."

The ill-matched alliance is powerful enough to sway the leadership of Cho Won-tae who needs help from his family to win confidence from shareholders. The Cho family and other relatives together hold a 28.93 percent stake shared almost equally by the new chairman, two sisters and their mother.

KCGI, the country's first activist equity fund, is the biggest single shareholder with 17.3 percent, followed by Delta Air Lines with 10 percent. Bando holds 8.28 percent and the National Pension Service (NPS), a state pension fund, owns 4.11 percent. Delta has been among friendly shareholders, while KCGI has spearheaded a campaign against the Cho family.

"We will make every effort to strengthen Hanjin Group`s professional management system and board-oriented management so as to establish an exemplary governance structure that can enhance the interests of ordinary shareholders who have been excluded and realize common interests of shareholders without being swayed by the individual interests of any particular shareholder," Hyun-ah and her partners said.

The first sign of revolt came on December 23, when Hyun-ah openly criticized her brother for running the group without prior consultations with family members.