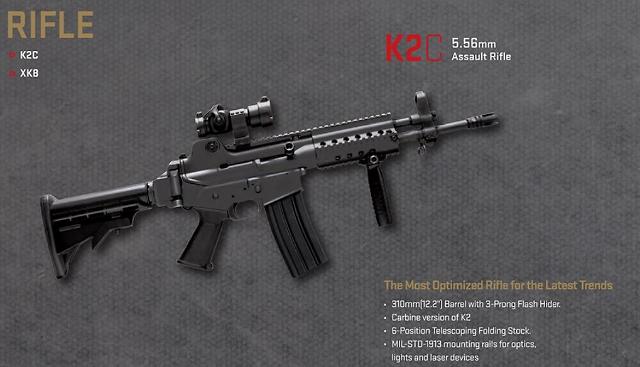 SEOUL -- S&T Motiv, a firearms and core auto parts manufacturer in South Korea, partnered with Poongsan, a domestic ammo company, for the development of a next-generation assault rifle with increased accuracy and destructive power over a long effective range to cope with the enhance performance of bulletproof clothing.

S&T Motiv, the producer of K2 rifles used widely for South Korean troops, said it would complete the development of the new rifle in two years, based on a memorandum of understanding with Poongsan, which produces a wide variety of ammunition for small arms, antiaircraft guns and other weaponry.

The next-generation rifle will be chambered in 6.8-millimeter with better accuracy and penetration than conventional ones as it will have higher ballistic stability at long distances with an effective range of 500 meters or more. The performance of bulletproof clothing has improved, prompting S&T Motiv, previously known as Daewoo Precision Industries, to develop firearms that can increase penetration.

After the licensed production of Colt's M16A1 ended, South Korea began developing its own firearms. Since it was adopted for service in 1984, the K2 rifle has served South Korean troops with a raft of upgrades. The weapon had an 18.3-inch barrel length and was chambered in 5.56-millimeter, with a maximum effective range of 400 meters, maintaining reputation for sturdiness.