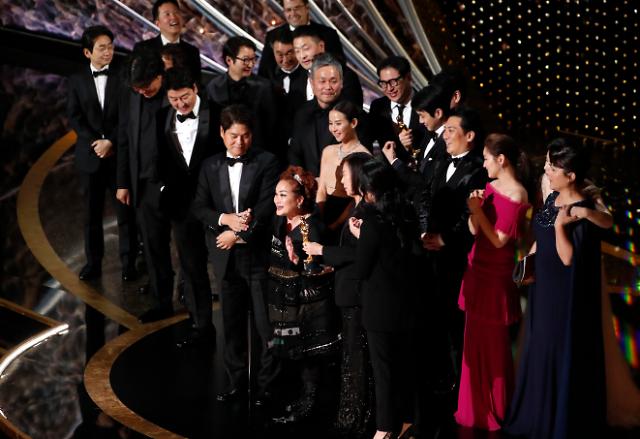 Much of the glory went to the director, but critics agree that Miky Lee (Lee Mie-kyung) deserves compliment for making steady investments in Bong's films such as Memories of Murder (2003), Mother (2009), Snowpiercer (2013), Okja (2017) and Parasite.

"I really thank director Bong. Thank you for being you. I like everything about him, his smile, his crazy hair, the way he talks, the way he walks and especially the way he directs," Miky Lee said in her capacity as a responsible producer, standing together on stage with Bong at the award ceremony in Los Angeles.

State censorship had a tremendous impact on the South Korean film industry for decades under the rule of military dictatorship. During the period of censorship, filmmakers were not allowed to freely express their creativity as well as their ideas and thoughts, leading to the decline of the film industry.

Along with his brother, Miky Lee founded CJ Group’s entertainment and media division, a year after open censorship dissipated with the inauguration of South Korea's first civilian government in 1993. Since then, she has actively invested in South Korea's movie industry, contributing to the Renaissance in filmmaking.

However, Miky Lee went through an ordeal when the conservative government of jailed ex-president Park Geun-hye took office in 2013. Group chairman Lee Jae-hyun, 59, was sentenced to four years in prison in 2014 on conviction of embezzlement, tax evasion and breach of trust, and she withdrew from CJ's leadership.

Miky Lee came back to management in 2017 after Park was ousted. In a probe into Park's wrongdoing, special prosecutors found that CJ was coerced to oust Miky Lee after the disgraced leader allegedly expressed discontent over CJ's films such as "The Attorney that portrayed the life of South Korea's late liberal leader Roh Moo-hyun, and a political satire program aired by CJ's cable channel tvN.

Actor Song Kang-ho was blacklisted by Park's administration for taking on the mail role in The Attorney, a 2013 courtroom drama film inspired by the real-life case of 1981, when 22 students, teachers and office workers were arrested without warrants on fabricated charges that they were North Korea sympathizers.

Roh formed a legal team with his allies, including South Korea's current leader Moon Jae-in, to defend them and became an influential human rights lawyer. Other films financed by CJ ENM such as Memories of Murder, Joint Security Area and Berlin went against Park's taste.

While Lee Myung-bak, a businessman-turned conservative politician, served as president from 2008 to 2013, intelligence officials were accused of creating a watch list of actors, film directors, columnists and singers for their critical stance to exclude them from the mainstream media and state support.

A state fact-finding committee said earlier that Bong had been blacklisted, along with his films -- Memories of Murder for describing civil servants and police as the hotbed of corruption, The Host for fanning anti-U.S. sentiment and government incompetence, and Snowpiercer for denying the market economy and encouraging social resistance movements.

The committee, which ended its activities last year, found that some 9,000 cultural figures and 340 organizations had been discriminated against.

The blacklist came to light after Park was jailed in 2017. In January 2018, former culture minister Cho Yoon-sun was sentenced to two years in prison for her role in blacklisting outspoken artists and cultural figures, including movie director Park Chan-wook, who won the grand prize at the Cannes Film Festival in 2004.

Chung Ji-young, a veteran film director and screenwriter known for dealing with sensitive social and political topics, complained of hard times he had to endure under previous conservative governments, in November 2019 when he released "Black Money", a crime film based on a real story that marked his first film in seven years. The director said it took a long time to produce the film because he was blacklisted by previous conservative governments.