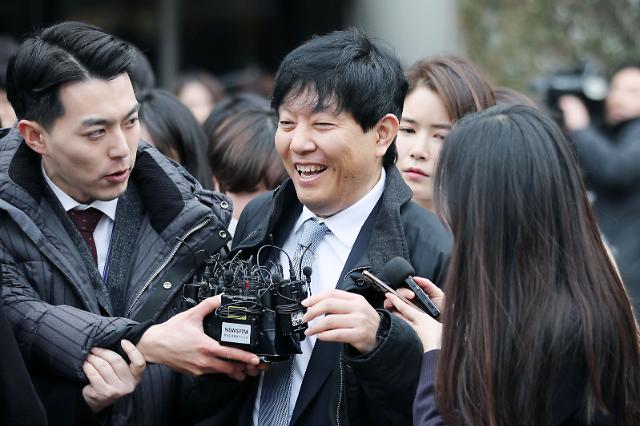 SoCar CEO Lee Jae-woong smiles broadly at a news conference outside a Seoul court after he was found not guilty on February 19. [Yonhap Photo]

SEOUL -- Tada, a smartphone-based ride-hailing service run by a pioneer in South Korea's mobility service market, was found not guilty after a court rejected argument by state prosecutors that it is an illegal paid taxi service. The court defined Tada as a rent car service based on mobile applications.

Tada has rapidly grown to become South Korea's leading ride-offering service since it was officially launched using 11-seat multi-purpose vans in October 2018 in Seoul and its satellite cities. The service is run by Value Creators & Company (VCNC), which is a unit of SoCar, a mobility service platform operator.

A year later, Tada was in trouble when prosecutors indicted SoCar CEO Lee Jae-woong and VCNC head Park Jae-uk on complaints from Taxi drivers who insisted Tada was engaged in illegal taxi service and violated the law that forbids rented vehicles from offering rides in exchange for money.

A criminal court in Seoul handed down a judgment of acquittal on Wednesday, suggesting that mobility industries and regulatory authorities should find "constructive solutions" as Tada consists of a contractual relationship that provides on-demand rental when required by making reservations in minutes for the convenience of users.

To develop future mobility platforms and enhance service quality, SoCar has won a series of investments from foreign and domestic investors. Tada has announced plans to develop an AI-based data platform that would effectively analyze big data to estimate customers' demands and control vehicle supply.

South Korea's ride-sharing and car-hailing services remained stagnant due to strong objection by taxi drivers who have complained about low income, excessive work and poor working conditions. Government data showed that there are more than 250,000 taxis in South Korea with drivers in Seoul working for an average of 12 hours a day and earning an average of about 2.1 million won.