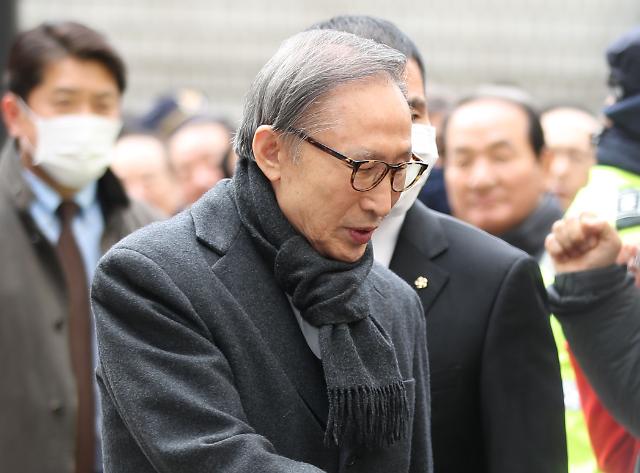 Ex-president Lee Myung-bak shakes hands with supporters before walking into to the Seoul High Court on February 19. [Yonhap News Photo]

SEOUL -- Ex-president Lee Myung-bak was thrown back into prison after an appeals court canceled an earlier decision to release him on bail and raised his sentence to 17 years on corruption, embezzlement and other charges, scolding the businessman-turned former leader for showing no repentance.

The 78-year-old became one of South Korea's two former presidents living in prison at the same time. His successor, Park Geun-hye, should stay in prison for a total of 33 years for her role in a massive corruption scandal that revealed deep-rooted collusive ties between businessmen and politicians.

In October 2018, a lower court sentenced Lee to 15 years. He has asserted his innocence, arguing he never received bribes during his five-year tenure or used his position to pursue private interests, but he was found guilty of embezzling a company fund of 24.6 billion won and taking bribes from Samsung Electronics and others.

On March 6, 2019, the Seoul High Court released Lee, who served as president from 2008 to early 2013, on bail on the condition that he should put himself into virtual house arrest and exercise more than one hour every day.

On Wednesday, the appeals court raised Lee's prison term by two years and imposed a fine of 13 billion won ($10.9 million) along with the forfeiture of 5.78 billion won. Lee was in a position to prevent corruption, but he abandoned his duties and took bribes while doing unfair business practices, the court said in its verdict, adding the method of taking bribes was covert and not exposed well.

At the center of debate has been DAS, an auto parts supplier for Hyundai Motor. Prosecutors have insisted Lee was the real owner of DAS and used it to create a slush fund. The ex-president has insisted the company was owned and managed by his brother. Lee was also convicted of taking bribes in return for favors.