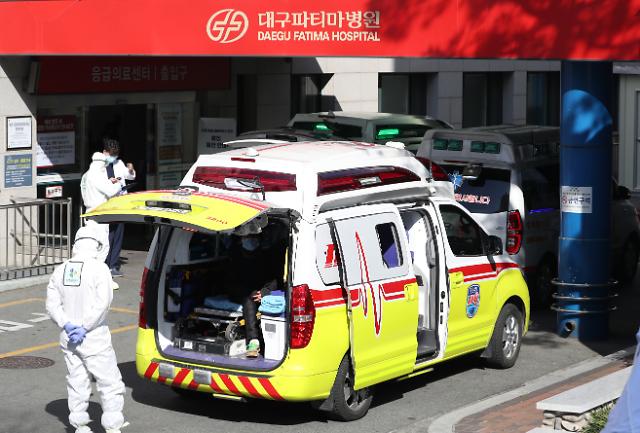 SEOUL -- The spread of the new coronavirus in South Korea may be accelerating, with the country's probable first "super spreader" having infected as many as 14 out of the 20 newly reported virus cases at church services.

The country's 31st COVID-19 patient, who resides in Daegu, 300 kilometers southeast of Seoul, is judged to have infected at least 15 others, according to the Korea Centers for Disease Control and Prevention (KCDC) on Wednesday.'

A preliminary epidemiological investigation shows that the potential super spreader attended the same church service as 14 of the newly confirmed patients and had person-to-person contact with one person at a Daegu hospital. "We believe that there were many contacts at the church and we are planning to conduct kit tests for the entire church," Jeong Eun-kyeong, chief of the KCDC, said in a regular briefing.

Jung also said the incident was one of "super spread" but that further epidemiological investigation should be conducted to determine who was the source of infection and what its route was. The patient was hospitalized at a Daegu hospital from February 7~17. The KCDC said that the patient has had contact with 166 people, who have now placed themselves into self-quarantine.

What constitutes a super spreader is not clearly defined, but people can be labeled such if they transmit the disease to more than 10 others. There have been several reports of "super spreaders" globally, including in Singapore and Britain, who are allegedly responsible for disproportionately infecting a large number of people with COVID-19.

The public health authorities said earlier it is still unclear how the 31st patient contracted the virus as she had not made contact with other confirmed patients or been abroad recently. The KCDC, meanwhile, said the 31st patient had refused to take the COVID-19 kit tests upon her visit to the hospital on Feb. 8 despite doctors' recommendation.

They are trying to find out how three other patients who reside near the city were infected, after those who had made contact with them unwittingly contracted the illness. The health authorities said they are not considering a lockdown on the city as the situation is very manageable.

South Korea reported 20 new virus cases Wednesday, bringing the total number of infections here to 51. The country has released 16 virus patients from quarantine so far after they made full recoveries, the KCDC said.
(Yonhap)