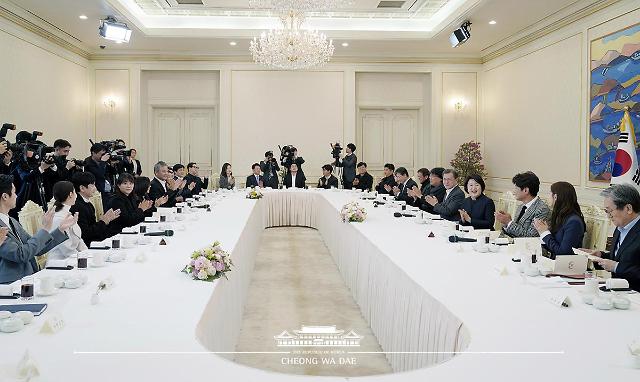 
SEOUL -- At a luncheon hosted by South Korean President Moon Jae-in for Parasite director Bong Joon-ho and his team, First Lady Kim Jung-sook has personally prepared her version of "Ram-don" that went viral online for meticulously illustrating the gap between high and low class families in the Oscar-winning film.

Ram-don is the witty brainchild of film subtitle translator Darcy Parquet. Originally known as "Jjapaguri," a mixture of two different instant noodles, was translated into Ram-don in Parasite to help the understanding of the non-Korean speaking audience around the world. Parasite used Ram-don to depict the rich-poor gap.

In the film, the rich housewife asks her housemaid to prepare Ram-don for her son. Not exactly knowing what the recipe was, the housemaid created a combination of Chapaghetti, an instant black bean sauce noodle, and Neoguri, an instant noodle with spicy seafood soup. Luckily, the housemaid's imagination was what the house owner had meant. Ram-don was served with cubes of expensive sirloin.

"Jjapaguri dedicated by my wife was included as a taste for you," Moon said at the luncheon on Thursday in the presidential Blue House. Kim, well known for her cooking skills, has served important guests with her own dishes.

Bong was content with Kim's recipe and said, "I've never tried jjapaguri before writing a scenario, and it's delicious."

Instead of beef, Kim used pork neck and green onions to make common food, calling it "Green onion Jjapaguri." "I thought adding beef tenderloin would be too greasy, so I used pork neck," she said, adding she had mixd food ingredients "all afternoon yesterday" for her own cooking.

In Parasite, Bong tried to show the class division through a mixture of two cheap instant noodles, which are popular among kids regardless of their class. "Even the rich kid, he's still a kid. That's why he loves this dish," he said in an interview in October last year. "But the mom can't accept the fact that her son eats such a cheap dish. So she has to add the topping fit for the rich, sirloin," the director said earlier.

Moon expressed sympathy for the message Bong has tried to deliver through Parasite and vowed to support South Korea's film industry. "But there will never be any interference," the president said in his reference to a blacklist drawn by South Korea's previous conservative governments, drawing applause from Bong and his team.

Bong was once blacklisted, along with his films -- Memories of Murder for describing civil servants and police as the hotbed of corruption, The Host for fanning anti-U.S. sentiment and government incompetence, and Snowpiercer for denying the market economy and encouraging social resistance movements.

Actor Song Kang-ho was also blacklisted by the administration of jailed ex-president Park Geun-hye for taking on the mail role in The Attorney, a 2013 courtroom drama film inspired by the real-life case of 1981, when 22 students, teachers and office workers were arrested without warrants on fabricated charges that they were North Korea sympathizers.

Roh formed a legal team with his allies, including President Moon, to defend them and became an influential human rights lawyer.

While Lee Myung-bak, a businessman-turned conservative politician, served as president from 2008 to 2013, intelligence officials were accused of creating a watch list of actors, film directors, columnists and singers for their critical stance to exclude them from the mainstream media and state support.

The blacklist came to light after Park was jailed in 2017. In January 2018, former culture minister Cho Yoon-sun was sentenced to two years in prison for her role in blacklisting outspoken artists and cultural figures, including movie director Park Chan-wook, who won the grand prize at the Cannes Film Festival in 2004.