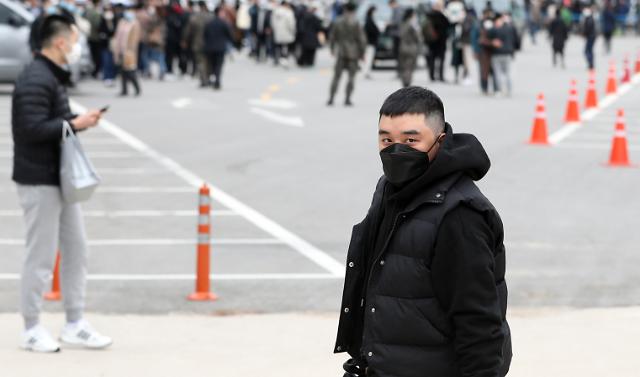 SEOUL -- Wearing a black face mask, black hoodie, black pants and black vest, Seungri had his hair cut short when he made his public appearance to walk into a frontline military boot camp near the inter-Korean border.

The 29-year-old bowed toward reporters waiting at the parking lot of the boot camp in Cheorwon northeast of Seoul as he walked silently to a temporary clinic to check for his body temperature.

The former BIGBANG member was given a notice of military service in early February, days after prosecutors indicted him for gambling overseas and arranging sexual favors for foreign investors. His case will be handled by a military court.

Seungri, who was known as one of South Korea's most successful singer-turned-businessmen, has been the target of public criticism since a 28-year-old dance club customer claimed in January last year that he was brutally beaten by Burning Sun employees. An investigation exposed drug trafficking and a sex video scandal that forced the departure of celebrities.

In November last year, Jung Joon-young, a singer and TV personality, was sentenced to six years in prison on charges of filming sex videos and sharing them with other singer friends through social media chat rooms.