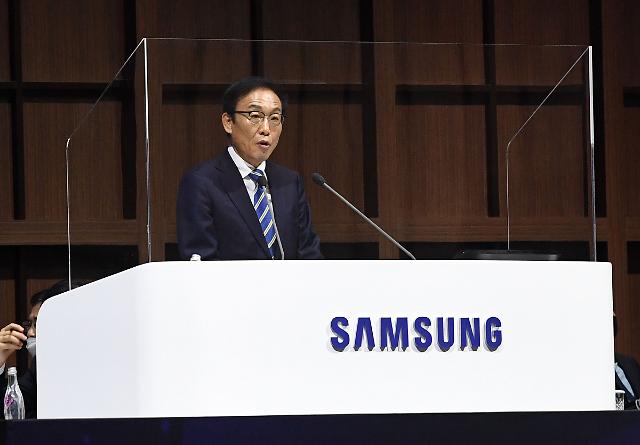 SEOUL -- Samsung Electronics is uncertain about how much a global coronavirus pandemic will eat away at its business performance this year, but top executives vowed to strengthen the company's global competitiveness through aggressive investment and innovation.

"Internal and external uncertainties are expected to continue due to COVID-19 and the U.S.-China trade conflict," Samsung's device solutions division head Kim Ki-nam told a general meeting of stockholders on Wednesday.

To lead the future in any environmental changes, Kim said Samsung would preempt business opportunities by continuously innovating technologies as well as investing in future growth-based technologies such as system semiconductors and quantum dot displays.

Samsung, which is the world's largest smartphone and microchip producer, has revealed a massive investment worth 133 trillion won ($108 billion) by 2030 to strengthen its competitiveness in System LSI and foundry businesses, saying it aims to become the world leader in not only memory semiconductors but also logic chips.

IT and mobile division head Koh Dong-jin conceded that the smartphone market is expected to contract due to the COVID-19 pandemic. However, he predicted that demands for 5G phones would grow. "Samsung Electronics plans to lead the market through differentiated premium products."

"It's somewhat subsiding in our country, but it is just at the beginning globally," Samsung's consumer electronics head Kim Hyun-suk said. "We don't know exactly what impact it will have on the global distribution of (home appliances)," he said, adding Samsung would globally release "Sero" that allows users to enjoy mobile videos by synchronizing phones and TVs.

Sero, which means "vertical" in Korean, received attention when it was unveiled last year for its versatileness as it can mirror the vertical image that is shown in smartphones or tablets just by pivoting the TV's display to a vertical mode. It can be interlocked with smartphones for YouTube and other social networking services. The new TV can operate by using a smartphone app or bringing a smartphone to a TV..