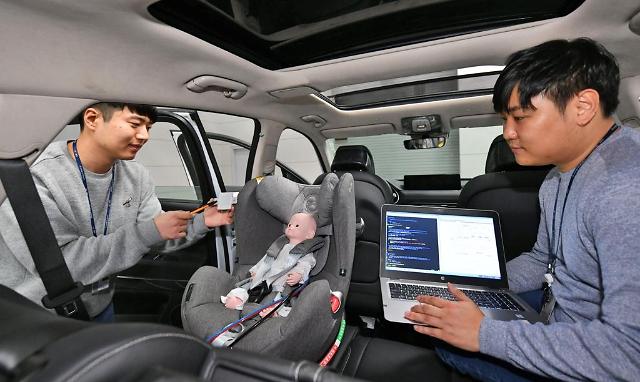 Hyundai Mobis said that the radar-based rear occupant alert (ROA) system alerts the driver through the instrument panel or smartphone if a passenger remains in the back seat. The system is more accurate in sensing children in rear seats than an ultrasonic alert system.

Camera sensors do not recognize infants covered with blankets, but radars can measure minute movements of the chest and blood flow of passengers by passing through their clothes.

Hyundai Mobis said its system operates normally even in high-voltage lines or near railways and is sophisticated enough to distinguish adults, infants and pets. The company would upgrade its system to measure the heart rate of passengers.

In the era of full self-driving, seating arrangements will be free. Hyundai Mobis said the ROA system can be combined with safety technologies such as airbags and seat belts depending on the shape and location of passengers.

"We are focusing on developing technologies that take into account passenger safety based on the vehicle's interior sensor technology, which is an axis of self-driving technology," said Chang Jae-ho, head of Hyundai Mobis' electrical and electronics R&D center.