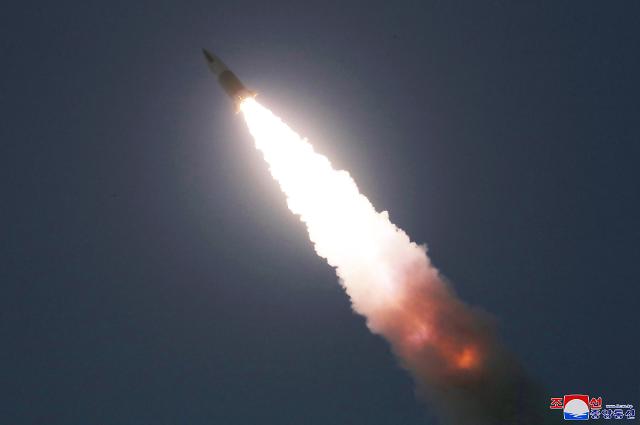 North Korea claimed to have tested a "tactical guided" weapon on March 21. Pyongyang's official Korean Central News Agency (KCNA) said the test "clearly proved the characters of different flight trajectories and falling angles" as well as the accuracy of guided shells and their power.

South Korea's military said two projectiles flew around 410 kilometers (254 miles), reaching a maximum altitude of around 50 km and showing a "pull-up" maneuver over the course of their flight. The pull-up maneuver is designed to avoid interception.

Based on photographic evidence, Michael Elleman, a missile expert at the International Institute for Strategic Studies (IISS), judged that North Korea tested a single-stage, solid-fuel missile named KN-24 that outwardly looks like the ATACMS, which is 13 feet (4.0 m) high and 24 inches (610 mm) in diameter.

"It is easy to judge the missile very nearly combat-ready, or soon to be operationally deployed," Elleman said in an article published by 38 North, the website of a U.S. think tank. He said two KN-24s were launched only five minutes apart, an improvement from the roughly 15-minute separation between coupled firings of August 9 and 15, 2019.

"While the KN-24 is likely larger than ATACMS, and large enough to carry a North Korean nuclear device, it is far from clear if North Korea intends to arm the missile with nuclear weapons. However, it seems apparent that we cannot dismiss the possibility that, at a future date, Pyongyang will look to make the KN-24 dual capable," the expert said.

The variable trajectory indicates that aft-mounted fins were employed to maintain aerodynamic control over the missile's entire flight, including its dive toward the target, Elleman said. "When combined with an inertial navigation unit updated with satellite-guidance data, the KN-24 is, in principle, capable of precision delivery of its warhead."

Photographs released by North Korea's state media showed the missile striking a rocky outcropping. If authentic, it suggests the missile is "at a minimum" equipped with satellite-guidance receivers, as the island is just 100 m in length along the missile's flight direction, Elleman said, adding there is no direct evidence that the KN-24 is equipped with radar or optical sensor to guide the missile into a specific target.

Elleman saw some "observable" differences. The ATACMS employs foldable aft fins to fit into a cylindrical launch tube mounted on a road-mobile vehicle, but KN-24's fins, while movable during flight, do not fold, he said. "The North Korean missile is therefore deployed and launched from a rectangular canister which is bulkier, although it is also mounted on a robust mobile platform."

The North Korean missile can fly at least 410 km while ATACMS covers just 300 km, the expert said. "It seems more reasonable to conclude that the KN-24 is significantly larger than ATACMS."

Since May 2019, North Korea has tested new solid-fuel short-range ballistic missiles. The KN-23, whose external features closely resemble the Russian Iskander missile, can possibly fly more than 600 km. KN-23 and KN-24 are likely armed with either a unitary warhead containing roughly 400 to 500 kg of high-explosives, or a submunition warhead packed with a few hundred smaller charges.

North Korea has also tested KN-25 and KN-09 guided multiple-launch rocket systems. In March, North Korea has tested the 600-㎜ KN-25 system with a maximum range of about 400 km. The time of continuous launch was reduced to 20 seconds, the shortest yet to date.

The KN-25 system is capable of attacking rear-echelon targets, but its payload bay is too small to deliver a nuclear weapon.